A blend of superfoods

These capsules have ingredients such as pomegranate, broccoli, turmeric and green tea. 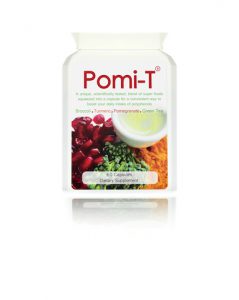 Watching one’s diet does not always mean eating less to lose weight but rather, the key is achieving balance in getting healthy. It is also about knowing what one’s body needs to function properly and getting sufficient nutrients for a healthy well-balanced diet.

POMI-T is said to be one of the few supplements supported by medical research to boost the body’s defence against cancer. Its combination of natural ingredients has been carefully researched in a study backed by the UK’s National Cancer Research Network (NCRN). Formulated by Professor Robert Thomas, a leading British oncologist, POMI-T is based on scientific studies into the properties of the four ingredients. These were chosen for their various abilities to modify the way cancer cells regulate their growth, without significant side effects.

Professor Thomas conducted a double-blind randomised clinical trial to evaluate the effectiveness of POMI-T, and the results were announced in 2013 at the American Society of Clinical Oncology (ASCO) annual meeting. In that study funded by the NCRN, POMI-T was shown to lower levels of prostate-specific antigen (PSA), a protein that indicated abnormal growth in prostate cells, and slows cancer progression.