A family deals with hearing loss, together

A former Miss Universe Singapore shares some insights to talking to family members about getting hearing aids. 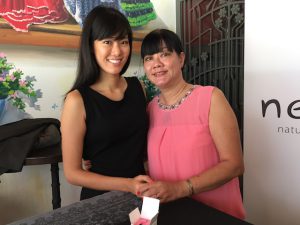 Valerie Lim, 30, a former Miss Universe Singapore, had a hard time talking to her 58-year-old mother, Eugine Soh. There was one incident last year in December that Valerie shared during a Nessa World Hearing Day event, when she told her mother that she was going out that night to meet friends.

However, Eugine kept asking her about it; she asked the same question about where Valerie was going about three or four times within the day. Said Valerie: “I thought maybe I wasn’t clear when I told her, but she would ask again after a few hours. I then said to her, ‘I already told you where I was going! Did you not hear me?!’ I got frustrated and yelled at her. I felt horrible that night when I went out.”

When she returned home the same night, she apologised and clarified with her mother if she had not been clear or loud enough. Later that night, the two talked further about what was happening and Valerie was clear she didn’t want to approach the conversation in an angry manner “as I didn’t want to lose the close relationship I have with my mother”.

Added Eugine, “I didn’t know much about hearing loss in the beginning. Honestly, I didn’t know my hearing was that bad. It is not something you realise immediately.”

When Valerie moved to the Philippines for work last December, she also felt it was important to stay in touch with her parents through regular phone calls and Skype. “It is comforting talking to my parents as I was having a hard time adjusting in the Philippines. I really needed them to be there for me.” And with her recent marriage, she wanted her mother to be able to share the highlights in her life and be able to hear during these milestones.

“Hearing loss is definitely not an easy topic to broach with a family member. With hearing loss, the relationship with them deteriorates and trying to maintain it becomes a challenge,” added Valerie, a fashion and restaurant entrepreneur, and director of Curators Collective Group. She was lucky as her mother was easy to persuade into trying a hearing aid for 30 days.

Said Eugine: “I was game for it. In my heart, I was apprehensive about going for a hearing test in February this year as I didn’t know how severe it would be. I got fitted with hearing aids right away and the whole thing was fun. It was not serious or frightening. The important thing is being self-aware.” Valerie gifted the hearing aid to her mother. 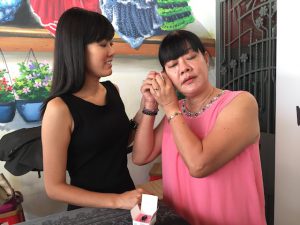 Eugine putting on the hearing aid.

However, that was not the end – Valerie’s next challenge was her 80-year-old grandfather. “When I got married, he couldn’t hear the vows exchanged and fell asleep during our reception! He has been very anxious for us to have kids; he wants to hear the pitter patter of little feet. Unfortunately, due to age-related hearing loss, he wouldn’t be able to hear a baby cry if I had one, or it calling for him. For a grandfather, there can be no greater joy than seeing your grandchild getting married and then to be able to hear the laughter of your great-grandchildren!”

In March, Valerie, and Eugine and her mother, sat Valerie’s grandfather at the table to discuss hearing aid options and explain why he needed one. Said Valerie: “Naturally, he was apprehensive at first as nobody wants to be told that they need assistance with something that should come naturally to them. But we eased it into the conversation; first telling him about the [Nessa] event and how the hearing aid helped mom.”

She added: “I felt the biggest turning point was when I told mom to let grandpa try on just one side her hearing aid. Grandpa’s hearing in the left ear is worse compared to the other, so we got him to wear the aid in the better ear. We asked him how it felt: if he felt it was comfortable. The important thing was to ensure he felt comfortable wearing it; not force him to magically hear better. What was great was the fact that although the hearing aid was not adjusted to his specific level, it still helped him hear better. We could instantly see the difference once he put it on! He was more responsive and alert!”

That night when Nessa’s audiologist came to conduct the hearing test and fit Valerie’s grandfather with his hearing aids, the turning point was obvious. “The first thing he did was smile,” shared Valerie, “It was then that I knew he could hear all those things he could not for the last 10 years. That smile alone made me break out in tears.”

So what advice would she give to others on talking to family members about hearing aids? She shared: “Sit them down as a family so they know that the hearing loss does not simply affect them, it has ripple effects and everyone in the family is also affected. Also, don’t put pressure on them to miraculously hear everything with the hearing aid. The wearer should feel comfortable with wearing a hearing aid which encourages them to use it in the long run.”