A glimpse into the Japanese Occupation

An 87-year-old shares her trials and tribulations from 1941 to 1945. Originally this story was shared with her young granddaughter. This is Part I in a three-part series of her story.

Going to Clifford School in Kuala Lipis, Pahang, was fun and enjoyable. As I was only in Primary IV, the studying subjects were easy and interesting. The homework was limited and student life was not stressful. I liked reading storybooks but had no money to buy any, nonetheless I still got my hands on books as I borrowed them from my classmates.

Besides schoolwork, I also enjoyed outdoor activities. At school, I participated in hockey, netball and athletics. It was a carefree life for a girl of 12 years old, living with my mother who came from China, older brother and his family. My father was a businessman and had four wives – his first and third wife had passed away. He was living with his fourth wife (my mother was the second wife) at one of the shophouses (the other was rented out).

In late 1941, there was a rumour of an impending war. I could sense that people were worried and prepared to evacuate themselves from the town to the countryside. I could see a lot of them hurriedly loading their household goods into lorries or cars. Those without any form of transport carried their precious items in two big baskets attached on both ends of a long pole, carried across their shoulders.

At my age, war meant nothing to me, but to the adults around, there were anxiety, uncertainty and fear. They could not visualise what the outcome of the war would be like, but it was good to be prepared as news of the Japanese invasion in China brought suffering and hardship to the Chinese citizens.

A telephone call from my father advised us to leave Kuala Lipis and return to our hometown in Semenyih (a small town about an hour’s drive from Kuala Lumpur, the capital of the state of Selangor) for safety. This made me feel sad to part with my friends, classmates and my flowering plants. I loved those plants as I grew them in empty biscuit tins, as I was too poor to buy proper flowerpots. All I needed was to punch holds at the bottom of the tins to drain the water from the soil. This method perfectly suited the flowers as they flourished. With tears streaming down my face, I said my goodbyes to all my plants as I felt I would never see them again.

My father owned two shophouses in Semenyih. As it was too dangerous for teenage girls and women to stay in the town with the advancing Japanese soldiers approaching fast on their bicycles as they might do a lot of harm to them, my father opted for all females (including my mother, sister, sister-in-law, helper and myself) to go to a house he had built in our rubber estate (it was about three or four miles from town and there was no bus and we had to walk all the way) until peace was restored. The men (consisting of my father, brothers, cousins and other relatives) who stayed in the shops took turns to be with us during the evenings. Our shops in town needed to be watched and business attended to.

When the British troops were withdrawing southwards to Singapore, looting in all the towns was a common sight as there was no sign of policemen on duty. The nights were peaceful in the rubber estate except for the croaking of frogs, creaking of crickets and buzzing of mosquitoes. Occasionally in the stillness of the night, we could hear the zooming of Japanese planes, lighting up the sky with bright flashes, followed by dropping of bombs with loud explosions in Kuala Lumpur. As we watched and waited, we were frightened and shivered all over with helplessness. We knew we were safe in the estate; the Japanese would not like to waste their bombs unnecessarily on innocent people. 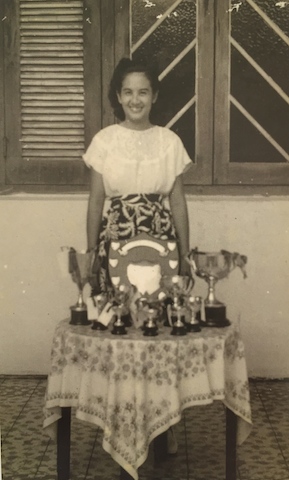 Yoon Yin showing her many medals.

Not long after, news came that the Japanese troops were cycling across Malaya from the north to the south towards Singapore. News travelled very fast as we had good connections from one rubber estate to another or from one farmhouse to another, although our houses were built far apart. The estate’s rubber tappers or farmers used whistles to warn us whenever the Japanese soldiers cycling on the road were approaching our estate. We depended on this relay system of warning to give us time to run and hide in the jungle.

These warnings unfortunately occurred quite often, irrespective of the time of day or night. I remember clearly one afternoon while preparing lunch, we heard the sound of the whistle loud and clear. We quickly dropped whatever we were doing, carried my eight-month-old nephew and dashed into the deep jungle. I was very worried he would give us away if he cried. I put my finger on my lips and said to him, “Shi, shi, please don’t cry, the Japanese will catch us.” He looked at me as if he understood what I was saying. He was such a good and obedient boy, and kept his promise without chuckling or crying.

It was lunchtime but we could not go home without the signal to indicate that all was clear. As we looked around, there was a patch of pineapple plants with ripe pineapples. The only way to quench our thirst and get rid of our hunger was to get hold of those pineapples. Wah! They really tasted good, so juicy and so sweet. For a while we had forgotten about the mosquitoes, ants and insect bites.

Meanwhile, troops after troops of Japanese cyclists passed by this small town without stopping until one day, two soldiers entered one of our shops. They looked at the family photos hanging on the wall and pointed to the ladies and girls with their dirty and sweaty fingers. They shouted, “Gu-niang, gu-niang (meaning ladies)?” My cousin, who was looking after the shop, tried hard to avoid the question and pretended not to understand what they were asking. He told them he had no knowledge of the family, as he was only there to look after the shop. They threatened to kill him if he refused to reveal the truth.

One of them poured kerosene over the mattress to burn the shop while the other pointed his bayonet at my cousin’s stomach, intending to kill him. Just then, a captain of the troop appeared and commanded the two soldiers to proceed on their journey. He appeared just in time to save my cousin’s life.

Tan Yoon Yin, 87, is grandmother of three who keeps busy gardening, tidying the house, cooking and meeting friends, and regularly attends all kinds of talks. In the past, she was the founder and president of the Women’s Netball Association and the Women’s Hockey Association.