A new insurance plan by AXA Life looks beyond the disease and more at the patient and his or her needs.

Roger See was diagnosed with Stage 1 nasopharyngeal carcinoma or what is called nose cancer in 2005 when he was 52 years old and working as a taxi driver. As he had led a healthy life as a non-smoker and a non-drinker, this news came as a shock to him and his family.

This started his road to battling the disease, which was not an easy one. From hospitalisations to chemotherapy and operations, as well as aftercare support, which are often necessary for cancer patients, turned out to be very expensive for him. In addition, he had to start medical treatments immediately and because they made him feel sick and weak, he had to forego working. To add to this, Roger did not have sufficient insurance coverage to cover all the expenses, and his family struggled to support him financially. 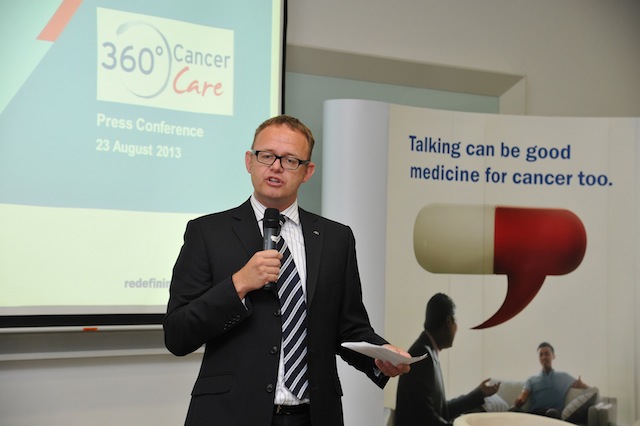 Just as the treatments were helping to manage his disease, the cancer relapsed in 2007 and in 2008, he received further news that it spread to more than 20 locations in his bones. The doctors told him the cancer was incurable and gave him less than a year to live. He and his family were lost and helpless.

Today, he continues to battle the disease and recounts his experience that he wished there was professional help and advice when he was first diagnosed with cancer. “I feel counselling is definitely important as it provides proper advice and guidance for cancer patients who feel totally lost,” said Roger. He also recognises the importance of having insurance to provide financial assistance such as lump-sum payouts to relieve the financial burden.

In addition, he shares the important role of post-care treatments like traditional Chinese medicine (TCM), dieticians and hair care specialists and that all these services can add up, and not all patients can afford them. Said Roger, “TCM can’t cure cancer but it definitely plays an important and supportive role in cancer management.”

He continues to stay positive, “To cope with cancer, we must practice three ‘A’s – accept, adjust and adapt.” 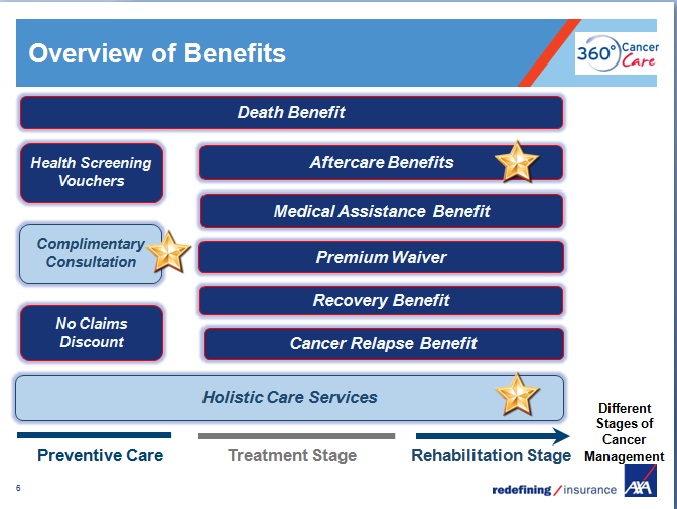 An overview of the new insurance plan.

As such, AXA Life Insurance Singapore has recently launched 360º Cancer Care, the first-ever holistic care insurance plan in the market. It will take care of financial, practical as well as emotional concerns that may arise before, during and after cancer treatment.

• Treatment stage – Upon diagnosis of cancer, or during the treatment stage, customers can also get access to a dedicated telephone concierge service to find the right doctors and medical treatments in Singapore, as well as priority hospital admission and specialist consultation. The phone lines are available in both English and Mandarin.

In addition, the new plan covers immediate financial support during the three stages of cancer above; medical assistance benefit, which provides a lump-sum payout upon diagnosis of cancer; a lump-sum payout to support basic expenses through the Recovery Benefit in the event that the cancer advances and home rest is recommended; and a Cancer Relapse Benefit, which provides an additional payout on relapse of cancer.

Eddy Lim, head of Protection and Savings Proposition, AXA Life, added about the plan: “We are putting all the options including medical and non-medical treatments on the table from the very start [from when patients are diagnosed with cancer]. This means less stress for the patient and his family will be less affected. This may result in a better chance of survival for the patient.” 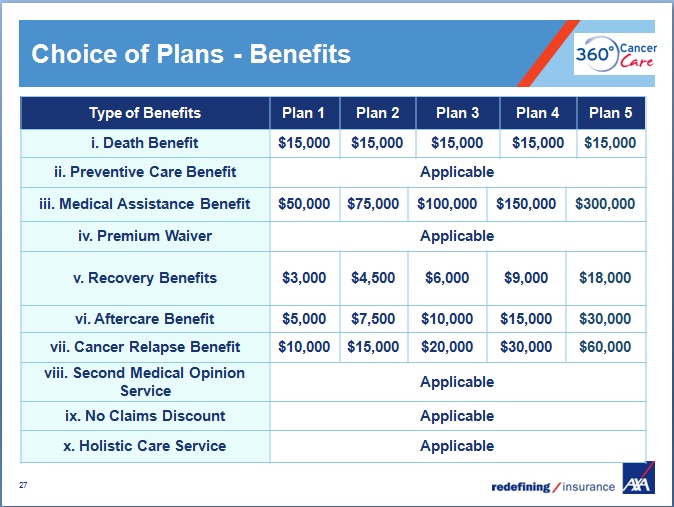 The various plans and benefits.

The 360º Cancer Care is open for anyone from one-year-old to 69, with the latter being covered up till 75. For those 50 and above, only two of the plans are available (see chart on left for more details of the differences in the plans):

For every policy purchased, AXA Life will donate $5 to non-profit organisation, Singapore Cancer Society. For more information on the new plan, go to: www.axa.com.sg.