A 71-year-old recounts the time when her marriage broke down and the only thing she could find solace in was alcohol. 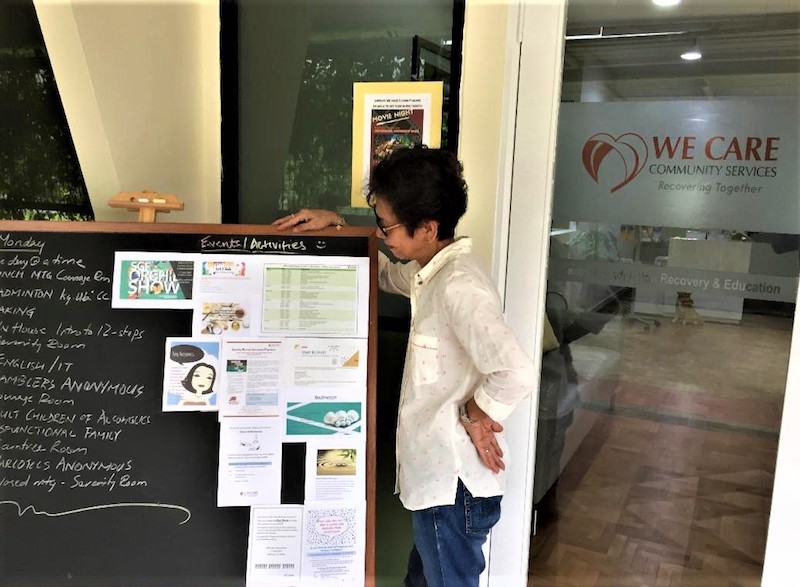 Simona Lee (a pseudonym), 71, had a soft spot for alcohol. She recalled that when she was around 11 years old, particularly during gatherings, she and her older siblings would drink beer and house wine, while her younger siblings had soft drinks. “I loved to drink but never went overboard; it was mostly social drinking initially.”

But all that changed when her seven-year marriage broke down in 1976, when she was in her 30s, and she embarked on a journey that was hard to turn back. “My life became a rollercoaster. It was also a time when I started working for the first time in the F&B industry where I helped in the kitchen – cutting vegetables, making sandwiches, cleaning up, etc.

“I also had to move out of my in-laws’ place after 10 years and I had to bring up my three young children (the youngest being two years old while the oldest was 10) on my own. Facing the real-world without my husband was a big challenge especially on the financial side as he was not contributing enough.” To deal with this, she had to rent out the extra room in her flat, and even take on additional work like babysitting and giving tuition.

At her F&B job, Simona also hung out with the “wrong crowd” that would drink a lot after work and she would happily join them. “I really enjoyed drinking and wanted to get high to numb the feeling of being a single mother, and the shame and guilt that came along with that,” she explained.

“In looking back, I put it on myself. I felt embarrassed that I was a single mother; that people looked down on me that I didn’t have a husband and couldn’t keep him. There was a stigma during that time. I had to make up stories that he was a seaman and he seldom came home.”

Besides her drinking with her colleagues, she also drank at home. “Initially I was drinking a can of Guinness Stout occasionally at home. It then gradually increased and continued heavily particularly after my daughter was 14 and succumbed to an illness and had to have surgery. I wanted to drink to numb my feelings so it was a big bottle of Stout every day or hard liquor.”

Her children were still young and they didn’t know their mother had a problem; all they knew was she enjoyed drinking. After her drinking binge, she would always show up to work on time the next day, albeit with a hangover. “I would suddenly burst into tears after heavy drinking at night with my colleagues. I was really naive about all those drinking episodes and I took it as something normal.”

Even after having a few accidents such as falling into a drain and bruising herself, alarms were still not going off that something was terribly wrong. “I just brushed it off and continued drinking. I had no idea of wanting to stop drinking … and I couldn’t.”

Her drinking didn’t abate. In 1990, Simona’s eldest child went overseas for work. This followed with her stopping work in 2001 and two years later, her remaining two children, who lived with her at home, got married in 2003. “I was feeling fearful of being alone, and I was drinking alone and no one knew anything.”

In 2004, after getting drunk at home at night, she fell in her bedroom, breaking her wrist. The next morning, she called her daughter and told her what happened. “She knew I had been drinking,” she shared. She went to the hospital with her daughter and they put her arm in a cast. The hospital also could tell she had been drinking, and referred her to the Institute of Mental Health (IMH).

“I had a fear of the stigma of IMH and I jokingly asked the doctor if they were going to put wires on my brain,” said Simona. She went nonetheless with the insistence of her daughter. At IMH, she was referred to a one-month outpatient programme under CAMPS (now called the National Addictions Management Service (NAMS)). “I still didn’t think anything was wrong and I didn’t really question myself,” she said.

The programme gave her the tools to start a new journey, without alcohol, and addressed key challenges such as how to deal with stress, relationships with people, and staying on the recovery path. Simona and others in the programme also had to take a daily breathalyser test and keep a journal detailing what they did each day. They also had to attend a support group run by ‘recovering people’ (which is now under WE CARE Community Services). During her time with the programme, she said that she managed to curb her temptations. “The programme gave me a lot of insights on the chemicals that I was putting in my body. It was a wake-up call and I was frightened as I didn’t want to die alone.”

She added, “I was still feeling groggy after many years of drinking but I was glad I wasn’t drinking anymore. It opened my eyes to see others with the different addictions and their stories were very painful and frightening. It also helped that my youngest daughter was supportive.”

Despite all this, she did “slip”. One night while out in 2004 with one of the members in the support group, they went bar-hopping. She told the member (a drug addict) that she could drink and that she herself wouldn’t, but temptation got the better of Simona and she took one drink. “I was high and angry that I took that drink. I went to the support group meeting the next morning and I told them I drank.”

Since then, she attends the support group meetings at WE CARE regularly. She also participates in other WE CARE programmes and activities, where she meets new friends and provides support and encouragement to ‘newbies’ that come for help.

With this constant support and learning, she has managed to stay away from alcohol. Besides revealing her addiction to her family and the support group, she has kept it a secret to others. When she is offered a drink, she usually tells people she is allergic to drinking.

To those who are on the similar journey like her, she shared this advice – “Get educated about your addiction, have the courage to ask for help, and stick to your recovery,” said Simona, who today is 14 years’ sober.

In her second life, she is occupying herself with the things she loves doing such as line dancing, reading, watching criminal investigation TV series, doing word searches, and doting on her grandchild. “I feel now more confident and not embarrassed about who I am. I don’t feel I am totally recovered as I might slip again. But for now, drinking doesn’t come into my mind like before. If I am faced with this, I am armed with the skills to deal with it, such as avoiding it or calling my buddy (her support group friend).”