A glimpse of a couple’s life over six decades which chronicles the spirit of survival against all odds and the ultimate sacrifices for the family good. 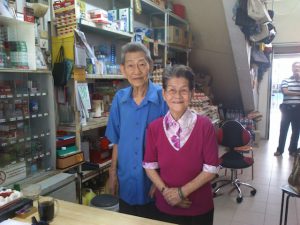 The Lims at their sundry shop.

Lim Tian Lye, 81, (left) and Toh Kwee Eng, 80, took the limelight at an event “Buggy Buggy Love by the Lake” on January 1, 2012 for being the couple who have logged 60 years of marriage, the longest among all the 33 participating couples. The event was organised by the Family Life Champions of Boon Lay, Chua Chu Kang, Pioneer, Yew Tee and Yuhua Divisions to celebrate marriage and foster closer family ties in the community.

What was planned as an interview by Agelessonline with the octogenarian couple on the secrets of marriage and long-lasting love, turned out to be much more than that! Glimpses of the Lims’ lives over six decades spun a colourful and inspirational chronicle of the spirit of survival against all odds and the ultimate sacrifices made for the family good in an era of much greater economic hardships:

Married on June 27, 1952, and after 10 children (four sons and six daughters), 15 grandchildren and three great grandchildren, Lim and Toh shared the story of their lives at their sundry shop Tian Hoe Farm Product Trading in Bukit Batok.

“Before he asked my parents for my hand two years after meeting me, I hadn’t even noticed him and hardly knew him!” said the petite but spunky Toh with a stern smile. In 1950, Lim and Toh were studying in the same secondary school, one in day class and the other in the evening one. “I went to his evening class to help teach the students to use the abacus which I was very good at. Apparently he already had his eyes on me at that time. In those days, people were much more conservative, I was only 18 and was not interested in boys or going out. In fact, I never went out with him and we never visited each other’s homes before we were married!” Toh said emphatically.

After two years of such courtship at a distance, Lim proposed through Toh’s parents who agreed and thus began their 60 years of life together.

Singapore in the 1950s and 60s was not the same city as we live in now. Post-war Singapore was strife with political and social turbulence as well as racial tension. The city-state and its masses were struggling with a host of economic problems such as mass unemployment, housing shortage, proper urban development and generally, low standard of living. The early days of the Lims’ marriage encapsulated the trials and tribulations of those bygone days.

If pigs can fly

When asked about the most memorable moments in their 60-year marriage, instead of the typical anecdotes of romance and love, Toh reminisced pragmatically, “The most unforgettable and hardest moment happened four months after we were married. My husband was still very young and wasn’t working after finishing school and getting married. We were living with his large extended family of six people when one day, his uncle, the kampong chief, ordered us to split away from the family, to go out and find work to support ourselves.”

Before they left, Lim’s third uncle wanted to give them a sow as a means of livelihood and asked Toh to draw lots to choose one among the few. “I picked an extremely productive sow that bore 15 piglets which we sold and managed to make some money when we first set out on our own.” After the first pig got old, Toh’s mother gave her another pig, which turned out to be equally productive. “We felt extremely blessed,” said Toh. 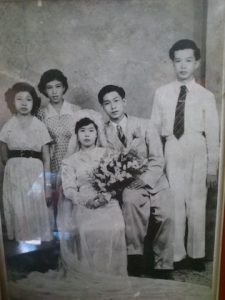 In the 1950s and 60s, the Lims spent much of the two decades toiling over multiple jobs and finding all sorts of ingenious ways to make ends meet to support their rapidly expanding family. Home was in Choa Chu Kang in those days, and the young couple ran a stall in a nearby factory selling food to the workers. At the same time, they also sold coffee powder; they picked up duck feathers from poultry farms and resold them; and they even took photos from people to have them replicated as paintings, charging a fee. They worked all through the day and night and hardly slept. While they were at work at the factory, their expanding brood of children were mobilised to look after the makeshift sundry shop that they also ran from their kampong home.

“At that time, my mother was very dark and thin from all that hard and harsh daily labour and not eating much. She has sacrificed a lot for the family,” testified their eldest son Lim Thiam Seng.

Said Toh: “Despite the hardship in those days, I still felt very blessed. While we were in Choa Chu Kang, we had really good neighbours who comforted me when they knew how desperately we were trying to make ends meet.” It was not easy rearing 10 children in such hard times, but Toh never for one moment thought of giving up. “There were people who asked to adopt some of my children, it was a common thing to do back in those days. For me, it was not an option to give away my children.”

Life improved for the family in the 1970s when the children had grown up and started working, taking some of the burden off their parents.

Back to the age-old question of how they managed to stay together for 60 years, Toh shared some of her words of wisdom: “One can’t have too many expectations in life, or you are bound to be disappointed. ‘Face’ is important to us too. Even though life was hard in those days, our minds were just set on one thing – to survive and bring up the family no matter what the circumstances were. Our labour has definitely paid off. I believe such is life – after all the bitterness, sweetness will come. To see our children having grown up into healthy and happy individuals is my greatest happiness.”

For Lim, who is the more quiet and subdued of the two, marriage is about “give and take”. ”Over the years, I have learned to increasingly appreciate my wife and what she has endured for the family. For a marriage to last, there needs to be common understanding, respect and tolerance. My mantra has always been not to take things to heart or take things too seriously, especially the things one says during an argument.”

For the Lims, retirement is not on the cards. They live upstairs from their sundry shop which they have been running every day from 4.30am to 7pm for the past 26 years without rest, except on the first day of Chinese New Year every year.

“We have customers who have been coming to us since they were young children. They are all grown-up now but some are still in the neighbourhood. We have customers of all races whom we see every day. They are our friends, this is our life,” Toh said with a smile and the greatest sense of contentment and happiness spilling out from the corners of her eyes.