A warrior in the making

Anjang Rosli may have dementia but he is not letting it get in the way, as he has found a new purpose in life.

Anjang Rosli and his wife, Sarima.

When we are dealt a bad hand in cards, we need to play them out. That is exactly what 56-year-old Anjang Rosli is doing when he got diagnosed with mixed dementia – young-onset dementia (YOD) and Lewy body dementia, a lesser known type of dementia (this dementia was what comedian and actor Robin Williams had).

He suspected something was wrong with him back in early 2003 when he was working at a chemical plant in Jurong Island as its superintendent. He started getting forgetful but wrote it off as his usual tiredness. As time passed, things escalated. He was good at his job and knew if ever there was an emergency, his yearly training would kick in and he would know what to do. That was what he thought. But, when a fire broke out in the plant, he wasn’t able to mobilise his team, an operational task he thought was second nature to him. Said Anjang, “My colleagues found it very awkward as I was one of the best employees at the plant.”

He called that moment his “turning point” and in 2010, he made a tough decision to quit. “I didn’t want any miscommunication with my team to become a problem that would then put other people’s lives in danger.” Instead, he decided to try his hand as a taxi driver. However, that didn’t go as smoothly as he wanted. He had many accidents and one time, he even hit a postman on his scooter and broke his bones. “I thought I pressed the brake but actually, I pressed the accelerator.” For that incident, he spent a night in lockup and his wife, Sarima had to bail him out.

There were also many other incidences. “I am a very good cook but suddenly, one day, I didn’t know how to turn on the kitchen stove and when preparing the ingredients, I didn’t know how to cut them. It was as if all the skills I had were suddenly gone. When you have dementia, you tend to lose the use of your mental capabilities and there are deficits.” He was also getting headaches and migraines, and having some of the symptoms of Lewy body dementia such as rapid eye movement (REM) sleep behaviour disorder, which can cause a person to physically act out his or her dreams while asleep.

So, in 2014 at the age of 50, he decided to take matters into his own hands and get the answers to what was really wrong with him. He went to Khoo Teck Puat Hospital (KTPH) and they told him to do a dementia test. “I thought I was intelligent but I failed the test.” He then did an MRI and the confirmation came back that he has dementia. “The news was devastating for me – my wife and I cried. I thought the world was collapsing on me.” At the time, he also didn’t know much about dementia even though his late mother had the condition.

As he has young-onset dementia, he was recommended to the National Neuroscience Institute (NNI) where he received a further confirmation. Before he went there, he did the research on Lewy body dementia and read the devastating news that the disease lasts an average of five to eight years from the time of diagnosis to death, however, as shared by the US’ National Institute on Aging, the time span can range from two to 20 years. He also read up on the symptoms of this type of dementia. According to the US’ Mayo Clinic, they include visual hallucinations, movement disorders, cognitive problems, sleeping difficulties, poor regulation of body functions, fluctuating attention, depression and apathy. Added Anjang: “Dementia is terminal, progressive, incurable and fatal.” On top of dementia, he was also diagnosed with Parkinson’s disease.

In getting this heartbreaking news, he didn’t want to tell his three children. It took him another one month and more research when he then sat each of them down separately and told them his condition. “Interestingly, my daughters didn’t cry but my son, who is a police officer, cried. They were speechless but they told me they would walk this journey with me. They felt I have a strong character and am spiritual, and my faith is strong, which would help me in this journey,” he said. He also singled out his wife’s unwavering support, saying: “I love my wife very much.” 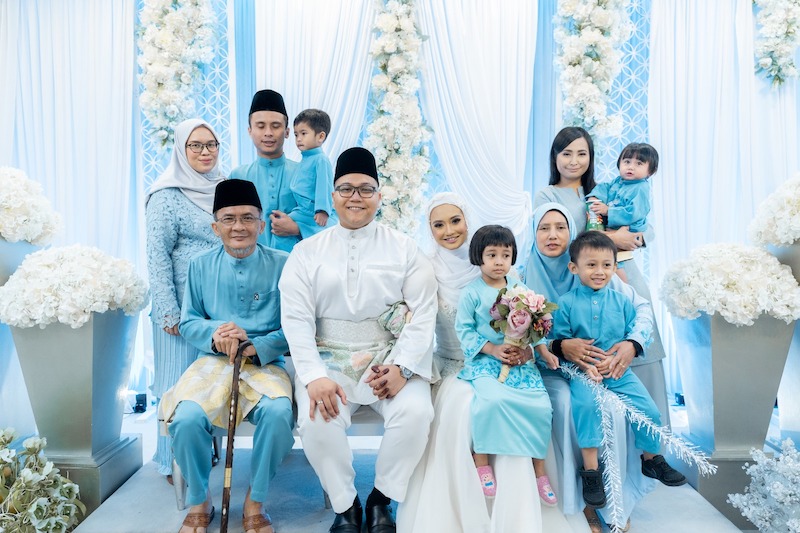 He shared that in these one or two months, he has seen the disease progress with his depression and hallucinations getting worse and becoming more frequent, and said that he is at the last stage of the disease. Nonetheless, he still manages to do this interview. He makes sure he prepares himself and does meditation and prayers, and his wife is a constant support in the background.

As looks can be deceiving and things may seem okay, they are a far-cry from being okay. “I can suddenly cry non-stop. My wife would then come and hug me. Once I went down to buy food and got confused and suddenly, I punched the employee of the food stall. I also often see my children as being young and would sit at my sofa in front of my door waiting for them to come home from school. Delusions are something you really believe; it is not good to argue with a person with dementia. When my delusions come, I can be transported to a place and see everything and there are voices. These delusions can last for a few hours. If they get bad, I do end up in the hospital.”

He has stopped his dementia as well as anti-depression medication as they had too many side effects including mood swings and fainting spells. These days he has traded them in for a more natural solution that includes black seed oil, turmeric, coconut oil and Omega-3. He shared: “In the beginning, as I are introducing a new system into my body, I had to do some overdosing. However, once my body adapted, I reduced the dosage back to the recommended dosage. For instance, with Omega-3, it is recommended to have two capsules but I took 10. After four to six weeks, I noticed my joints felt better.” The decisions Anjang makes are not baseless; he makes it a point to continuously read up and learn new things. He also keeps records of when his symptoms appear.

Even with his “new system”, it doesn’t mean that incidences don’t happen from time to time. “There was once when I got angry, I took a knife and started pointing it at my daughter. In my normal self, I wouldn’t do something like that. My family called the police and they talked me out of that. It is real. Those with dementia are suffering in silence,” he shared.

To add to his natural regimen, he also meditates for one hour every morning. Before bedtime, he does an affirmation meditation for one to two hours, giving gratitude to those who have supported him and he repeats it to himself. “I feel very good after doing this. I feel free, and I don’t feel entangled in my mind. I feel in some way like a newborn baby.” He also would wake up at 3am or 4am to do his prayers till 6am and uses this time to cry and talk to God. “With these techniques, it really helps me. When I fall, I am better able to pick myself up. As with Lewy body dementia, I get fluctuations of good and bad days, but I am better prepared.” He also appreciates having these routines as these are good particularly for those with dementia, he shared.

As he takes one day at a time, he knows even though he feels he has felt the worse, the worse though has yet to come. “I fear losing my mind because I know that stage will come. Dementia robs your brain. It will stop you from performing as a person. Many times, I have not been able to recognise people and I am afraid of that happening even more. You are then living as though you are not there. I don’t want to burden my wife and children. I want to keep my dignity and I pray to God every night that I do not end up at that stage as if I do, I would want him to take me. I don’t want to be remembered as someone who has lost my mind.”

Despite all these trials and tribulations, the grandfather of five isn’t spending his days lamenting of why this has happened to him. After being in denial for one to two months after his diagnosis, he ended up praying and realised there was still much to be done. “I feel life needs to go on. I use each day to bring positivity and to share about my journey with dementia.”

Before he got diagnosed, he was a volunteer drug counsellor at the prisons and he also helped motivate under-privileged children. This helping spirit has not waned. He continues doing so but with a different purpose, bringing more awareness to dementia as he can relate to what it has done to him. He is a volunteer at the Alzheimer’s Disease Association (ADA) where he gives awareness talks and is occasionally approached to share his perspectives on policy changes. “We may have dementia but we are human beings,” said Anjang.

He also started the Chapal Malay Dementia Community to do more outreach to the Malay community on dementia, which he feels is lacking. “I want the Malay communities to reach out to us if they don’t want to go to ADA. We can do house visits and help them map their journey for their loved ones,” he said.

He shared that his son recently did a post on his Facebook page calling Anjang a fighter and a warrior and encouraged him not to give up. He is definitely not throwing in the towel just yet. But, where does he get his strength from? He shared that it comes partly from his father who was a police officer and his mother. He shared proudly that she was the first Malay martial arts teacher in Singapore. Though she had dementia, she always pulled a smile when he would disturb her and would hug him. “When she knew that I was diagnosed with dementia, she told me to accept it and to be happy. She still kept her sense of humour despite her suffering.”

He shared that he will continue doing this work for as long as he can as it is important work and is even looking at publishing a book on living with dementia. “Life is too short for me to look behind; always look forward as you will see opportunities to do things.” For Anjang, his cards may be stacked against him but it doesn’t matter as he will play them on his own terms.