Many of these shops have mostly young staff and are catered to the younger crowd but at this outlet, you will see a 70-year-old “Ah Ma” brewing the fruit teas. 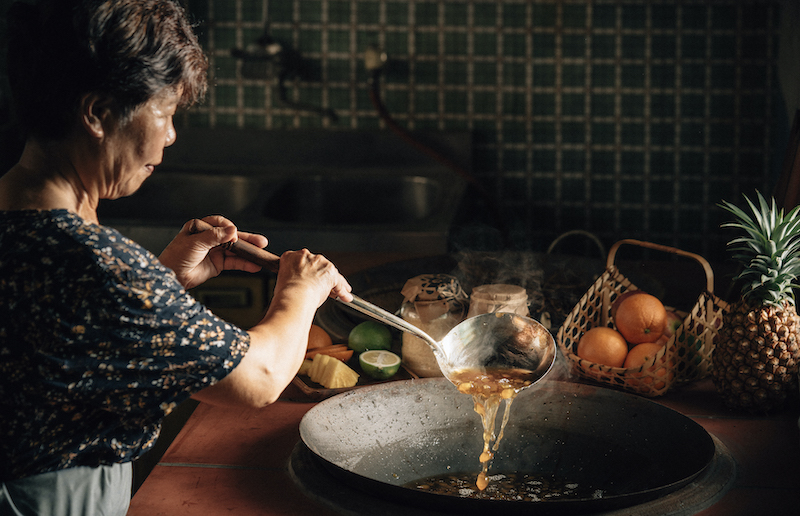 There is an unusual and pleasant sight at Yifang Taiwan Fruit Tea’s newest outlet at Change Alley Mall. With many of these bubble tea shops having mostly young staff and catered to a younger crowd, there is a “Ah Ma” as she is affectionately called, working there.

Seventy-year-old Peh Ah Ang plays an important role as she represents the grandmother-figure behind the brand’s story. Yifang Taiwan Fruit Tea’s founder’s grandmother named Yoshiko, who was born in Taiwan in 1920 during the Japanese colonial period, was married to a young farmer who toiled in a pineapple farm all day. Yoshiko made use of the overripe pineapples and braised them into a fruit jam which she then whisked into a jar of thirst-quenching and cooling pineapple water for her husband.

Yifang Taiwan Fruit Tea inherits Yoshiko’s birth name, 一芳(YiFang), and her pineapple jam recipe, and has passed them on from generation to generation. With an understanding of tradition, craftsmanship and the simple joys of life, Yifang Taiwan Fruit Tea continues to spread her legacy all over the world in its various outlets in US, Europe, Australia, New Zealand, Japan, China, Hong Kong, Dubai and the Southeast Asia.

Mayvia Koh, director at NextStep Holdings which owns the master franchise in Singapore and Hong Kong, shared: “Grandma lies at the heart of Yifang Taiwan Fruit Tea. The kitchen where her recipes are born and drinks are lovingly made, enriches Yifang Taiwan Fruit Tea with nostalgia and tradition. We hope that customers will be brought closer to the Yifang story with a real-life grandma working at the shop to remind everyone of the love of family and possibly, the sweet taste of childhood.”

Ah Ang, who has two children, is not only the oldest staff but also, she is in the only outlet in Singapore out of the total of 1,500 around the world to have an “Ah Ma” working there. Ah Ang, who has yet to be a grandmother herself, is at the outlet from Monday to Friday from 11am to 4pm with a one-hour break, cooking the tapioca pearls in a wok and brewing the fruit teas that are used in the various drink concoctions such as ginger lemon tea, and longan and jujube tea. As she stays with her children and they are not around during the day, she wanted to do something rather than stay at home alone, she shared. She found out about the job at Yifang Taiwan Fruit Tea on Facebook and enjoys being able to pick up new skills at her job.

Shared NextStep Holdings, “Many customers have commented that it’s endearing to see Ah Ma working the wok in the open kitchen.”

Ah Ang, who used to work in a factory for 18 years, doesn’t mind that she is the oldest among the younger staff who are below 25 and enjoys the camaraderie she builds with them. She also loves seeing the satisfied customers, especially many families who drop by the outlet together. She hopes to continue working and staying physically active for as long as she is able.

Asked if more Ah Mas will be part of the staff in upcoming outlets in Singapore, NextStep Holdings is hoping that is in the cards.