An 80-year-old grandmother of four and mother of two shares her story of her arranged marriage, her husband’s passing and her taking control of her life.

It was in my 20s when I got proposals to be married while I was in India. One came from my eventual husband from Singapore through his auntie in Bombay, who knew my mother. There were two other proposals. During our time, it was like that and my parents had the task to select the one. The first two were rejected and they chose my eventual husband as they found he came from a good family.

When he came to India to see his parents in East Pakistan (now called Bangladesh), he went to Bombay to his auntie’s house. My parents, cousin and I went to see him there. His other aunties and cousins were also present so it was quite a large group. The situation was I couldn’t say a word. During that time, the parents decided and I couldn’t even talk to him and he couldn’t talk to me either; we just looked at each other. Later, my parents and I went home and they had to decide what to do.

My uncle and auntie were living with us at the time. My uncle suggested he and I go to the high priest with my uncle so as to get blessings from him. I went and my uncle talked to the priest and told him about my marriage proposals. The priest asked me what I wanted and I said I had no idea but whatever he said, I would go with it. He said to go with my eventual husband and that he would make me happy, so the decision was made. He was 32 years old, while I was 20. He had then returned to Singapore when my father told his auntie about the decision. My uncle had two daughters and suggested to wait for two years until I was 22 when his daughters would also get married around the same time – as one was engaged and the other was still deciding on the proposals.

Not a baby machine 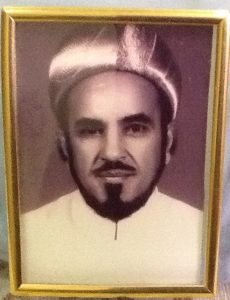 A picture of Amta’s husband.

Then what happened was my future in-laws asked me to come to Bangladesh to visit them in 1956, when I was 21. My father said ok and I went. However, I made a pit stop and travelled to Calcutta first and didn’t know anyone there. My mother-in-law’s sister’s daughter was staying there with her family so she invited me to stay with her. We didn’t know each other but somehow, we clicked. I was supposed to stay one or two days, but I ended up staying for 15 to 20 days! I was worried about my in-laws but they told me not to worry, and I enjoyed the company.

Later, I went to Bangladesh and saw my in-laws, as well as two sisters-in-law and a brother-in-law. I immediately clicked with my mother-in-law as she was a soft-hearted person. I helped her with the cooking and she liked me a lot. In the meantime, I had no correspondence with my husband-to-be as I didn’t know what to write to him as I didn’t know anything about him. However, he wrote to me later while I was staying at his parents and told me his boss in Singapore had given him permission to travel to Bangladesh to get married and I would then stay with his parents in the meantime as there wasn’t a house ready in Singapore. He asked me what I thought about this.

I was so angry and I told him that if he wanted to get married to me, he must come and get married, and must take me with him and I will stay in an attap house in Singapore. I didn’t want a situation like his father, where he would return every two years, and I would waste my time getting pregnant! Furthermore, I would have nothing to do. I told him that if he thought this wasn’t a good idea, then we would call off the engagement. He got upset and he didn’t expect such a response. He then wrote to his auntie and told her what had transpired. His auntie ran to my mother and told her everything, who in turn was upset and told his auntie to tell him not to worry and that she would talk to me on my return home from Bangladesh.

When I came home, my mother scolded me and said I shamed the family. My uncle loved me very much and he asked me to tell my side of the story. I told my uncle that I was not a machine that produces children and I am very active in my hometown. He agreed that I was correct on this and asked that my husband-to-be come in one years’ time as arranged initially and he would buy a house and must take me with him. That was done and my husband came when I was 22 and all of us married including my uncle’s two daughters.

Getting to know each other 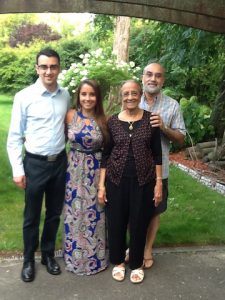 Amta with her elder son and her grandchildren.

He came on an Italian steamer ship and we went to Singapore on the ship 15 days after marrying. When we were together, we got to know each other. We talked about things especially my response to his proposal and then he later understood. We ended up staying in an attap house in Tampines, renting a room from a Chinese family, who were good to my husband. After one month, we found a one room in a kampung in Butterworth Lane in Tanjong Katong. There were all kinds of races; it was so good and I loved it and everyone liked me. People would give me things like pots.

Since there were Malays there, I thought I wanted to learn the language and got the children to teach me. I was their student and they were my teachers. I used to go to the market with a Malay lady as well, and we became good friends. Everyone took care of me and later when I got pregnant, my mother came over from India to help out. 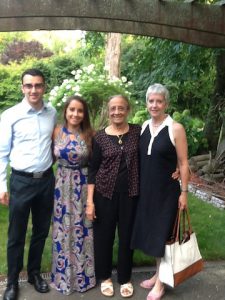 Amta with her daughter-in-law.

My husband was a salesman and his salary was not a lot so I did some order work such as crochet for extra money. When our first son was born 1959, I continued with the side work. After four years, our second son arrived and I still continued to work. When the children were older and I knew they could stay alone in the house, I decided to teach children in the mosque the Koran three times a week to earn extra money. I even went to Johor Bahru on Saturdays to teach children. I did this for 10 to 15 years. Since I only did ‘O’ Levels and my husband only got up to primary school, we never got a chance to study further and my husband wanted more for our children (our elder son is an obstetrician/gynaecologist in the US, while our other son is a chemical engineer in Singapore).

My husband was very soft in nature and as such, people would play him out. I always had to protect him. I handled all the finances; if he did so, our money would be all gone. He would give me his salary.

Picking up the pieces

He passed away in 1989 at the age of 65. He had no heart problems or anything that we knew about. He felt sick and he lay down, and I knew something was amiss. I called the doctor to see him and the ambulance took him to the hospital as a precaution. They told me that his arteries were blocked. Within half an hour, they came out and told my son and I that he passed. We were shocked; we couldn’t cry and didn’t know what to say.

I was really lost after; I wasn’t worried about money. I mourned for four months and 10 days and couldn’t go out. I had to wear white and no jewellery. It was tough for me. My elder son who was in the US couldn’t come to the funeral and I told him to do his exams first and then come back.

My husband and I were very active in the community and so I relied during this tough time on them and other friends. I also managed to get my brother’s wife to came from India (at the time, my father and mother had passed, as well as my uncle) and she stayed for over a month. 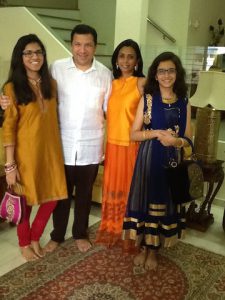 Amta’s younger son and his wife, and their children.

After everyone left, that was when it was a difficult time. I was lost. My son in Singapore was concerned and he arranged for me to visit the US and see my elder son for two to three months in late 1989. While there, my son and his family constantly made me do things on my own such as go on a train or take bus, and I eventually started to do things to pass time. My son commented that I was becoming like before.

When I came back to Singapore, I was back to “normal” and I started doing things such as sewing for money. Why should I be idle? I even went to the US to look after my grandson in 1990, and went back and forth to Singapore.

Today, I am learning Mandarin (I had learned French two years ago), which is my goal. When I hear people talk, I want to be able to understand some words. I am also brushing up on my Arabic and French using my iPad. Beyond this, I do yoga every Monday and volunteer at WINGS as and when. I also volunteer at the Singapore Heart Foundation and teach crochet at C3A. I am in the midst of making a quilt.

I think it is important to keep my mind as active as possible so I am not a burden to my children.