This year’s campaign enlists the community to spread the awareness to those 50 and above. 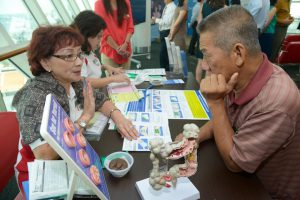 SCS screening staff providing guidance on how to use the FIT kit at home.

This year’s 13th annual Colorectal Cancer Awareness Campaign (CCAM) will be taking a different approach when it returns in March. The campaign will adopt a multi-pronged approach to target Singaporeans from all walks of life to be advocates for screening – in the community, in the workplace and in the home. These advocates will then encourage more people aged 50 and above to go for colorectal screening.

Factors that have been associated with higher risk of colorectal cancer include specific hereditary conditions, family history, older age, inflammatory bowel diseases, diets high in saturated fats and low in fibre, obesity, excessive alcohol intake, smoking, and a sedentary lifestyle. People with colorectal cancer may not experience any symptoms in the early stages. Fortunately, it can be prevented if screened regularly for early detection.

“Over the last 12 years, we have actively reached out to men and women aged 50 and older to go for regular colorectal cancer screening. Through this year’s campaign, we hope to also educate a larger group of audience on the importance of colorectal cancer screening so that they can advocate regular screening to the community, to their colleagues, and to their loved ones. We hope that this will also inculcate the habit of regular screening among Singaporeans in the long term. This year, we hope to reach out to 50,000 individuals through our multi-pronged approach,” said Dr Cheong Wai Kit, chairman of Colorectal Cancer Awareness Campaign 2014, Singapore Cancer Society Public Education committee member and senior consultant, Surgical Oncology, National University Cancer Institute, Singapore (NCIS).

He added that screening for colorectal cancer should begin from age 50 for those with no symptoms and they should go for screening using the FIT (Faecal Immunochemical Test), which checks for blood in the stool (that cannot be seen with the naked eye), which may be a sign of cancer. Dr Cheong continued that the test is safe, easy to do and should be done once a year. It does not require any fasting or change in diet before the test.

For the community advocacy approach, SCS has teamed up with Moulmein-Kallang Group Representation Constituency to be part of its City For All Ages (CFAA) health screening programme for the Kampong Glam Division. Commencing every weekend from March 1 for a six-month period, volunteers will conduct basic health screening including educating and handing out FIT kits to residents aged 50 to 69. 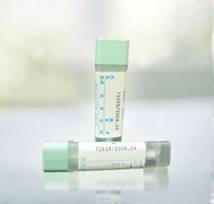 One of the key partners of the Colorectal Cancer Awareness Campaign 2014, Guardian Health and Beauty, which distributes the FIT kits through its islandwide stores during the campaign, will encourage its staff to attend colorectal cancer talks by SCS and hand out free FIT kits, as part its workplace advocacy for staff health and well-being.

In March, SCS will distribute its FIT kits for free at SingHealth Polyclinics and National Healthcare Group Polyclinics. In both March and April, the free FIT kits will be available at SCS Multi-Service Centre at Bishan Junction 8 Office Tower, SCS office at Realty Centre, 73 selected Guardian Health and Beauty outlets, as well as shopping centre roadshows.

A key CCAM 2014 objective with this year’s FIT kit distribution is to increase penetration rates. Currently, according to its own statistics, SCS has distributed FIT kits to 3.2 percent of the estimated one million men and women aged 50 to 79 last year. SCS’ target is to increase this to five percent by end 2014 and close to nine percent at the end of 2016, which is a three-fold increase.

As with previous years, organisers of the Colorectal Cancer Awareness Campaign 2014 hope to educate every individual about the benefits and importance of regular screening for colorectal cancer. A series of outreach and awareness events as well as public talks have also been planned for the months of March and April to reach out to the audiences.