A senior shares two distinct memories of her past – throwing pebbles at guards and her patchwork panty. 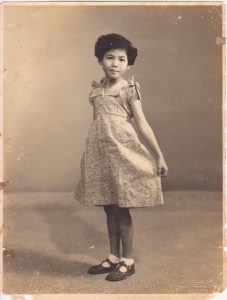 The mischievous girl with an impish grin.

There was a little girl with an impish grin and freckled cheeks. She was a fostered child to a maternal spinster aunt, who brought her up in the confines of a double-storey terrace shophouse in Lorong 37 Geylang district, Singapore.

The dwelling home was located right behind the then-Minister Lim Yew Hock’s (he was in office from 1956 to 1959) residence. There were security guards present at the vicinity at all times for the safety of the latter and his family. This little girl being the only child found ways to entertain herself. Her early childhood years were of playing five stones (a game with triangular cloth bags), skipping and hopping on squares drawn on the unpaved lanes behind the house, and playing catch with the neighbours’ kids. Soon, she found new avenues of adventure.

Using the pebbles meant for playing five stones, she hid behind the wall of the second-storey abode. Unseen from outside, she waited patiently for the guards to made their rounds along the back lanes. Gleefully, she aimed and flung the pebbles at the guards as they passed by behind the house and zoomed back in quickening speed of lightning to hide behind the wall. Whilst the guards were perplexed of the onslaught of pebbles, this little girl felt exuberantly happy of her achievements.

The adult residents in the house had no clue of the child’s daring display of mischief, nor got the chance to warn her of the danger. The women folks  comprising of her aunt, a middle-aged cousin and an old aunty from the paternal side often assembled on the ground floor after the meals and chores were done to embrace themselves in idle chatter which bored the little girl to tears. They proceeded upstairs only to retire for the night. So the child had free abandonment to pursue her world of pranks undisturbed on the upper floor. They in turn thought she was taking day-naps upstairs when all was quiet, prime and proper. They never once bothered to check out on her. She also hid the pebbles she picked from the back lanes carefully stored away in an unused cupboard in the storeroom. 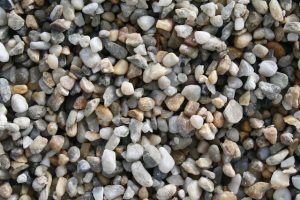 The guards had no idea she was the pebble thrower.

Consumed with the adventurous spirit and the innocence of her age, she did not envisage the lurking danger. She would crouch perilously on the balcony unseen behind the wall. Filled with excitement that her pebble aims went on target, she little realised she could have toppled over to the lower floor of the house. Luckily, this perky little girl was never physically hurt or caught for her mischievous acts.

Time flew on wings and in 1953, this little girl was admitted to Primary One at St Hilda’s School at Ceylon Road in Katong. Reluctantly, she started her school life without the least notion of the importance of an education for her. School life too brought a halt to her errant activities.

Then came the school health programme to the Primary One class. On a Monday morning, the class was told to strip down to their panties and had brief body examinations by the nurses from the health ministry. After the checks, each child was given a glass of milk to drink on the spot.

Though in her tender age, this little girl felt most awkwardly conscious of her colourful panty made from remnants of materials taken from her neighbour’s tailor shop. On each stripping occasion, she frantically hoped no one would notice her assorted-patch panty or at best, turn herself invisible on such occasions.

Though the maternal spinster aunt was not poor, it was more the thrifty lifestyle normally practiced during that era. The aunt herself wore the same colourful underwear sewn with a pocket on the reverse left side to hide her money in. 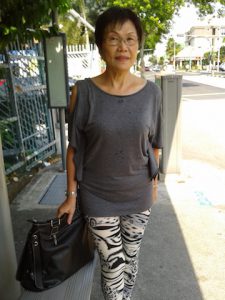 Through the path of life, this little girl weathered inevitable storms and uncharted territories. She took it all in her stride with steadfast valiance and enthusiasm to conquer every step of the way. This little girl is none other than myself. Now I am a senior enjoying the memories and love sharing the personal moments of my life through the years.

Maureen Tay (left), 67, keeps her golden years active and productive by volunteering in a seniors’ wellness programme. She admits she is “still nonsensical and fun loving”.