For the love of teaching

Yap Pow Thong at his 90th birthday celebration in Singapore.

I was born in Kuala Lumpur in 1925. Yap Kwan Seng was my grandfather and he had eight wives. There are very few third-generation Yap families still alive today so I would count myself lucky to be around. My father had four wives, which was normal at that time. My father had divorced his two wives and married my mother who came from Kampar, Perak, a mining town. My mother had 12 children, which is not the norm today. I was number 11 in the family. My mother had passed away when I was a year old, and my eldest sister and eldest brother brought me up.

After the Japanese Occupation in 1945, I went back to school to complete my studies in 1946 at Victoria Institution in Kuala Lumpur. I passed the School Certificate Examination (Cambridge) in 1947. Then I studied accountancy and sat for the examination conducted by London City & Guild.

My first job after World War II in 1948 was with a company called Rediffusion in Kuala Lumpur (KL), which sets up cable wires in homes. I was a ledger clerk in charge of a few ledger books and had a few accounts clerks under me. As I had less work and more time, the chief clerk asked me to take over his job of collecting money from 10 collectors who collected rentals of Redifussion sets. After collecting the money, I would hand it to the chief clerk who then would put into the bank in KL. He had promised me to that I would become a cashier, however, he never kept his promise and gave the job to his nephew.

Early days before World War II, Yap with his half brothers and sisters.

When my brother-in-law was stationed in KL as a police inspector, I used to hear him talk about his work and I found it interesting. Later, he was transferred to Seremban Central Police Station. In 1949 as I really wanted to also become a police inspector, my brother-in-law advised me to come to Seremban to get a job as a police clerk and interpreter. I also joined because I could get a good recommendation from the chief police officer when I applied to the Police Training College at Gurney Road in KL.

My job responsibility was to interpret for criminals and Communist detainees with the officers either in Cantonese or Hokkien, and I also had to do some office work. I didn’t have any friends to hang out with as most of the clerks were married. I felt lonely. Every weekend, I would come back to KL on the bus on Friday and go back on Sunday night by bus or train. To keep myself occupied, I also started learning Mandarin through a teacher at my house. I am not intellectually-gifted. I would also spend my time going to the Padang in Seremban to watch football. I ended up quitting the job after six months.

After that job, I did some teaching at the Methodist Afternoon School at Sentul for about a year. I taught all subjects except for languages and music as I wasn’t trained. My cousin’s sister and husband had a private school in Ampang, off KL, and they needed a teacher so I left the school in Sentul to work with them. I taught Math and English to primary school children.

Demand for teachers in Singapore 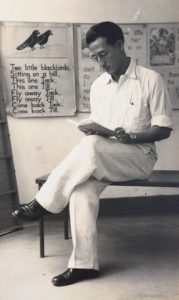 Pow Thong sitting in a classroom in the 1950s.

During that time, there was a big demand for teachers in Singapore as there was an expansion in school enrolment at the end of the War. Many people from different states in Malaysia came to Singapore to teach. In Singapore, there were not enough young people who were keen to teach. In 1952, I applied to the Teachers’ Training College in Singapore, which was set up in 1950 to conduct “normal” (different from certificate and diploma courses) courses in education for non-graduates. Later in 1953, they started the certificate courses for non-graduates. I got paid S$218 a month, with a S$10 increment each year.

I would teach in the morning and then go for lectures in the afternoon, or sometimes, lectures would be held in the morning and I would teach in the afternoon. During the night, I had to mark books. It was very hectic. Thinking back, I don’t know how I survived! We also were required to write a one-off 10,000-word thesis on any teaching subject. As I was teaching science to Primary 1 pupils, I decided to take photos of gardens, etc, and buy books with articles on science and teaching to include in my thesis. 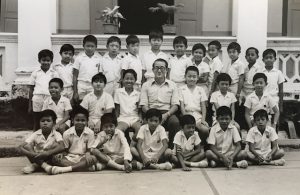 My first posting was to Pasir Panjang Primary School in 1952. This didn’t mean I could do it full-time and had a class to myself; I had to be observed by the Mistress of Method where she would tell me things I should or shouldn’t do. There was a surplus of teachers being observed and waiting for their placement. I was at the school for only a year and in 1953, I transferred to Clementi Primary School when it opened and got my own class. Again, I taught every subject except for languages and music. A year later I became a qualified full-time teacher at Dorset Primary School and earned S$420 a month.

I made a mistake on retiring early because I liked teaching, so I decided to stay on and was given a yearly contract. After which, I stayed on for another nine years and finally retired in 1989. I had never gone on tour overseas and in 1985, I got to do that. What keeps me busy these days is doing church work. 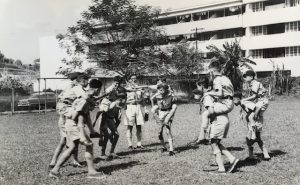 Pow Thong's extracurricular activities – he was a Tiong Bahru Primary School Scout Master and liked to hike and take the children out to camps. This picture was shot in 1955.

I love teaching children because I could mold pupils’ characters and prepare them for their adult life. I would advise them to work hard in their studies in school, and to participate in games. Also, I told the pupils to respect their teachers and at home, obey their parents as well as to care and look after them in their old age. In their working life, to do their work diligently, with honesty and integrity and be a team worker. Also, to remind them that education never stops. Besides enjoying their lives, they should continue to learn new things and to keep abreast of changing trends in life.