Cervical cancer is preventable and curable if it is treated in the pre-cancerous stage. Protect yourself with regular screening.

The Singapore Cancer Society (SCS) is holding its eight Cervical Cancer Awareness Month (CVCAM) in May 2013, in partnership with the Health Promotion Board, KK Women’s and Children’s Hospital, National University Cancer Institute, Singapore, Parkway Cancer Centre and the Singapore General Hospital. CVCAM 2013 aims to encourage more women to take advantage of free Pap smear screening services, which will be offered at 178 clinics island-wide during the month of May. 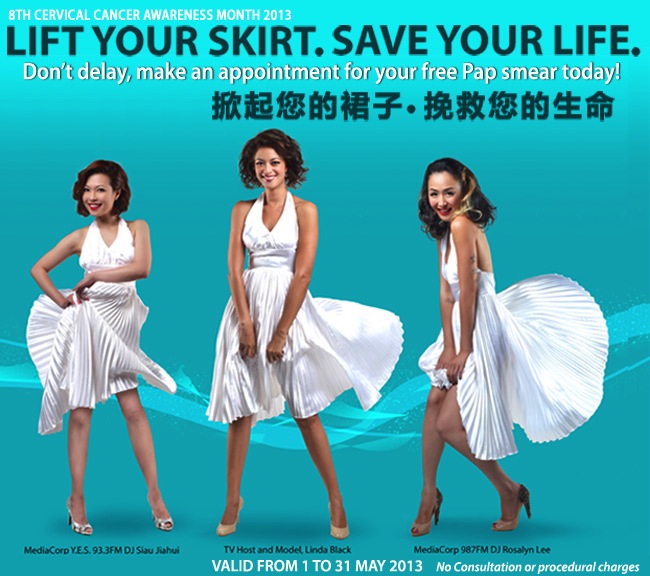 The “Lift your skirt. Save your life” campaign is a call to action for women aged 25 and above to have their Pap smears regularly.

The decline in incidence rate is likely due to increased public awareness, which resulted in more Singaporean women going for Pap smear screening as well as increasingly effective clinical management of pre-cancerous lesions. Despite the decrease in incidence rates, cervical cancer still strikes roughly 200 women and kills about 70 women in Singapore each year. Cervical cancer is highly preventable and curable when detected in its early stages.

Precancerous and cancerous changes in the cervix can be detected using the Pap smear test. The simple and safe test involves collecting cells from the cervix (neck of the womb).

Dr See Hui Ti, chairman of the CVCAM Organising Committee, said, “We are encouraged to see the rates of cervical cancer dropping rapidly to the current ranking of ninth. This is a perfect example of how improving awareness and promoting early screening and detection can prevent cancer.

“We hope to reach a wider and also a younger audience with the “Lift your Skirt, Save your Life” campaign which will be featured on social media platforms and public media to encourage women to be pro-active and go for their regular Pap smear screening. With the availability of Human Papilloma Virus (HPV) vaccinations, we are confident that cervical cancer will be knocked off the top 10 list!” (According to the Centers for Disease Control and Prevention in the US, the HPV vaccination is not currently recommended for women over age 26 years and for those over 26, “the best way to prevent cervical cancer is to get routine cervical cancer screening, as recommended”.)

Since 1969, SCS has been providing free Pap smear screening services at its clinic. On top of that, during the CVCAM month of May, SCS will make available free Pap smear screening at 178 clinics island-wide to all female Singaporeans and PRs aged 25 to 69 who are or have been sexually-active. During CVCAM last year, over 7,000 women were screened through 136 participating clinics. This year, with a wider network of 178 clinics, SCS aims to screen more than 10,000 women.