NTU students raise awareness of gout through a campaign called “Oh My Gout!”. 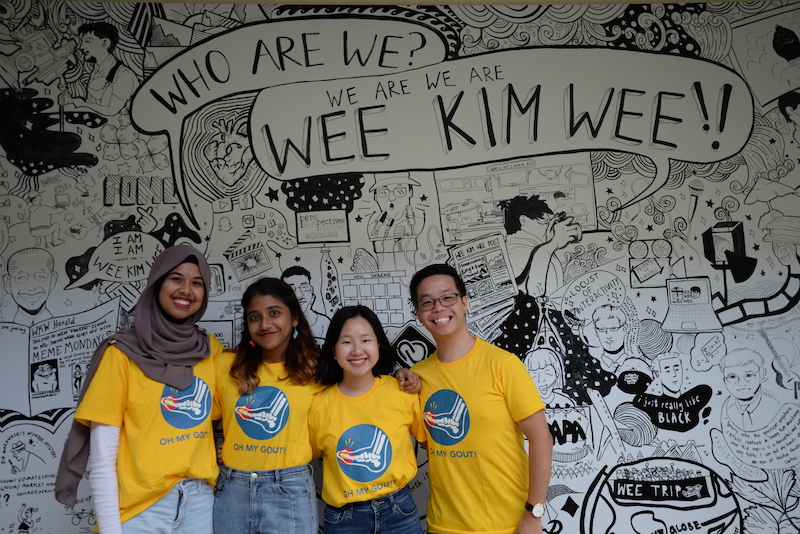 Gout was once known as a “rich man’s disease” as it believed to only affects the upper class who could afford rich foods. However, in recent years, this is no longer the case. This may be due to increased standards of living and dietary changes such as a rising trend of local preferences for “richer, sweeter and saltier foods”. Increased consumption of alcohol and sugary drinks, as well as sedentary lifestyles are also major contributing factors of this increased onset of gout.

Gout is caused by persistent high uric acid levels – or hyperuricemia which is attributed to an overproduction of uric acid in the body. It is also attributed to excessive eating of purine-rich foods such as certain organ meat, poultry, seafood,  alcohol and sugary drinks, since purines are broken down into uric acid. Excess uric acid crystallises into needles in the joints causing severe pain during a gout attack. The affected joint becomes hot, swollen and so sensitive that even a breeze or soft touch of a blanket can cause unbearable pain.

Chia Tee Kit, 58, who has suffered from gout for 20 years, described the pain of a gout attack as one that “never stops and comes like the wind, (the pain) is terrible and keeps on going”.

However, while prevalence of this disease has been rising over the years, the last local study to research the number of gout patients was done in 2012. In light of this, four final-year Nanyang Technological University (NTU) undergraduate students from the Wee Kim Wee School of Communication and Information conducted a recent survey amongst 230 Singaporean men aged 40 to 60. Twenty percent of the participants were shown to have been clinically diagnosed with gout, which is almost a five-fold increase of gout patients from the 2012 survey.

Dr Manjari Lahiri, a senior consultant in the Division of Rheumatology at the National University Hospital, shared that there is a lack of public awareness of gout as a chronic disease. “I don’t think people even think about gout as a long-term condition, as they would think of diseases like diabetes. Gout to most people is an attack that comes and goes, without realising the need for long-term control with medications and lifestyle change.”

As gout becomes more common, it is crucial to draw public attention to this disease, and its potential negative impacts. Gout attacks have been said to be one of the top 20 most painful conditions by the UK’s newspaper, The Independent. Other than the pain affecting one’s quality of life and taking an emotional toll on patients, physically, gout can eventually affect multiple joints and develop into painful lumps known as tophi. It can also cause possible joint damage and deformity, bone erosion, physical disability and even immobility. Gout also increases the risk of cardiovascular and kidney diseases, including high blood pressure and the formation of kidney stones respectively.

The NTU team has embarked on a campaign called “Oh My Gout!” to educate the public on gout. In particular, by playing on the pun of “Oh My God!”, a common phrase used to express emotions of disbelief and pain, the campaign calls attention to the severity and possible deeper health implications of gout. It also encourages people to seek medical treatment if they identify symptoms.

Gerald Koh, director of marketing and programmes at the National Arthritis Foundation, Singapore’s main public organisation devoted to helping arthritis sufferers, believes that increasing public awareness of gout and its associated health impacts is important. “The incidence of gout on men here is substantial and increasing due to lifestyle and dietary choices, yet not many are fully aware of the burden of this disease.”

As part of the campaign’s efforts to raise awareness about this chronic disease, the team has produced multiple video series aimed at educating the public. These videos include an edutainment video starring a relatable campaign ambassador for facts about gout in a colloquial manner and gout patient interview videos where they share their experience of living with gout. Through these, the team hopes to address common misconceptions of gout while increasing awareness of risk of gout amongst the high-risk group of middle-aged men.

** See one of the education videos below which is part of the “Oh My Gout!” campaign: