Hoarding – a pile of problems

Find out about the symptoms and behaviour, and how to avoid getting to that stage. 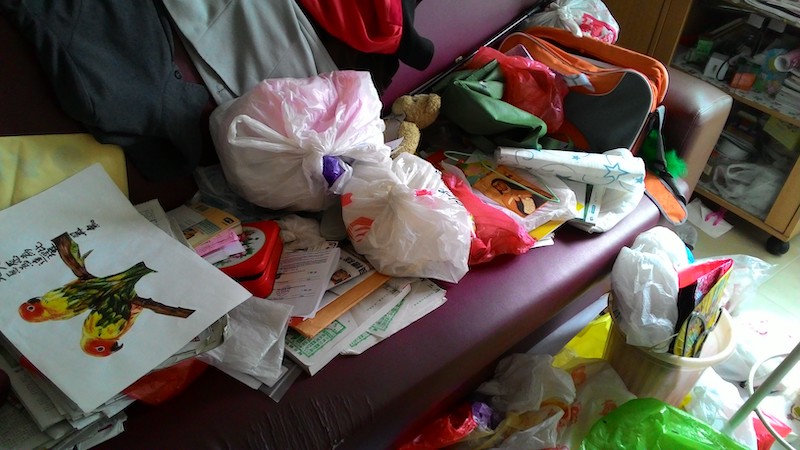 A case of hoarding.

We have all heard the news. Last year, a 68-year-old man was found dead by the Singapore Civil Defence Force (SCDF) among piles of trash in his flat. This was after a neighbour complained of a strong stench. And then there was 58-year-old man who hoarded items died from an accidental fire in his flat. According to a news report, when the fire broke out, firefighters struggled to get through the stacks of hoarded items that towered to the ceiling.

Hoarding is a real problem. According to the Institute of Mental Health’s (IMH) 2010 study, one in 50 people in Singapore will display hoarding behaviour in their lifetime. Chew Yat Peng, principal counsellor at O’Joy Care Services, explained during a recent talk on hoarding, organised by VolunteerSG, shared that although most reports point to elderly with hoarding behaviour, hoarding can start at a younger age such as at 11 to 15 and gradually spirals out of control and can take years.

She added: “It is also more obvious in one- or two-room HDB flats due to their smaller floor areas, and in which the elderly lives alone, or with family members who permit hoarding or who also hoard.

“A previous trauma or relationship difficulties can also cause hoarding.” She said that studies have shown that hoarding, and its degree of severity, is directly linked to emotional insecurity which arises from social isolation and a lack of resources, be it financial, material and emotional. Putting it in today’s context – where at the start of Covid-19, we heard the news of hoarding specifically on toilet paper. Yat Peng explained for this behaviour: “It made us feel we are prepared for an impending disaster.”

So, what exactly is hoarding? The “Diagnostic and Statistical Manual of Mental Disorders 2013” by the American Psychiatric Association explains that hoarding is an excessive acquisition of objects and inability to discard or part with possessions that appear to have no value to others, leading to excessive clutter, distress and disability. It added that hoarding causes significant distress or impairment in social, occupational, or other important areas of functioning, including maintaining a safe environment.

Yat Peng further explained that with hoarding behaviour, individuals may not be able to sleep in their beds, sit in their living rooms, or cook in their kitchens. It can create a range of health risks including fire, falling and poor sanitation such as bed bugs and other infestations. It also creates a poor quality of life as well as a strained relationship with family members. There can also be threats to health and safety extended to the neighbours such as a strong urine stench.

It is vastly different from cluttering which is generally considered normal. People with clutter in their homes typically store accumulated items in a few selected areas and areas like exits and entrances are kept litter-free. Also, other areas of the home are used as intended, and the clutter can be straightened up when guests arrive. Those with clutter in the area do not feel psychological distress when removing the items from the home, which is different from those who have hoarding behaviour. It is also different from collectors who will gather specific items that revolve around a theme such as stamps, matchboxes and wine collections. They take pride in showing off their collections and would have them on display.

Someone who hoards may exhibit the following, according to the Anxiety and Depression Association of America:

Yat Peng shared that sometimes, the elderly might also be too old to clear the clutter and when family members throw away the items without his or her knowledge, it can result in relationships becoming strained. It also can create a worse situation where the elderly become even more insecure. “The excessive clutter becomes like a security blanket,” she added.

While hoarding can be a mental illness, it can also manifest within other psychiatric conditions such as obsessive-compulsive disorder, major depressive disorder, acquisition-related impulse control disorders, generalised anxiety disorder, schizophrenia, and dementia. 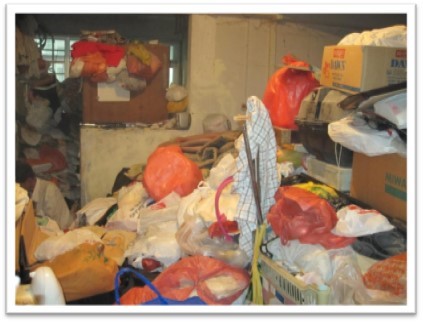 Items being piled up to the ceiling.

Yat Peng added, “Family members and service providers who are called in to help must first understand why the person hoards. He or she may feel it is a waste to throw the items away as he or she may want to use them in the future, keep them for sentimental value, or leave them as a legacy (arising to pride in his or her possessions). You then need to see if he or she can come to a form of compromise. You need to gain the person’s trust.”

Though conversations within family dynamics can be challenging as emotions involved, expectations to upkeep, etc, however, feeling understood by family members can be extremely valuable.

When family members are unable to curb their loved ones’ hoarding behaviour, intervention from service providers may be necessary such as Family Service Centres (FSCs).

Before it escalates to this tough situation, what can individuals do to avoid hoarding behaviour? According to O’Joy, “For normal individuals, perhaps it would be helpful to perform regular clean-ups of your home, such as most Chinese like to do before Chinese New Year every year, and to restrict acquisitions.”

The organisation suggested using the Kakeibo Method to control buying impulses. Before purchasing any non-essential items — or the things you buy on impulse, but might not necessarily need, ask yourself the following: