Moving to this town in Perak was a change but not all rosy. This is Part III and the final part in the series.

My brother was formerly a court interpreter and he returned to his former job. He was supplied with a government quarters, which was small but comfortable. But there was always a serious shortage of food. By now most of us were fed up of eating sweet potatoes and tapioca. Besides the lack of rice, there was a scarcity of cooking oil, salt and sugar. From the Japanese notes called banana notes, we could buy rationed broken rice to cook porridge, and eat with salted fish or ikan bilis. My mother planted vegetables on whatever open space that was available behind the house. We reared rabbits so that we could have meat on the table.

Because of the insufficiently balanced diet, many people suffered from beri-beri (big swollen legs and feet), with no medical treatment. Malaria and tuberculosis too were life-threatening diseases that were out of control. There was also a shortage of doctors and nurses, and an insufficient supply of medicines in the hospital.

Hunger forced me to go out and find a job so that I could get the extra ration of rice to support my brother’s family and my mother. Through a friend, I was lucky to get a job at the Japanese broadcasting station because I was fluent in speaking the Japanese language in 1944. I was put in charge of the children’s programming and broadcast children’s stories in Japanese. The work was interesting, and I had the opportunity to read a lot of storybooks and translate them into Japanese. The Japanese civilian officers were kind and friendly; my colleague and I got along with them very well. We even formed a choir, practiced and sang together after work.

Among the office colleagues, there was Madam Sum whose husband was a rice dealer in charge of selling and distributing rationed rice to the public. She and I became great friends after I helped her to study the Japanese language. Very often she invited me to have lunch in her shophouse. Imagine what a treat it was to have a chance to eat pure white-grain rice, salted fish, meat and vegetables. Madam Sum was very kind and thoughtful; she often gave me the leftovers to take home to my mother.

Every morning before we started work at 8am, we assembled in the big open space in front of the building to sing the Japanese national anthem while the Japanese flag was being raised. Then the mass exercise called “Rajo Taiso” was held with the blasting of Japanese marching tunes. I was often called to stand in front to lead the group, followed by the singing of Japanese patriotic songs. Some of us were teenagers and enjoyed what was being taught.

At lunchtime, we were only allowed to tune in to the radio to listen to local Japanese propaganda news, mostly on the progress of the mighty Japanese armies winning wars and advancing into Burma towards India. There were cases of people who defied the Japanese and secretly tuned in to BBC news. They were caught and severely punished.

Whenever the siren sounded while at work, we would stop everything we were doing and rush into the air raid shelters. The sound of British planes were heard over us, and no one dared to show any sign of relief or welcome for fear of punishment.

The only leisure activity after work was to go to the cinema, which showed propaganda movies of the war. Most people stayed at home by nightfall under candlelight or small kerosene lamps.

Next to our house was the former police station, which turned into a Japanese military police headquarters called “Kempeitai” or simply, house of torture.

Though the Japanese were the conquerors, they were unsure of their position in the country. They were determined to wipe out anti-Japanese sentiment by using informers or spies to identify the people who were anti-Japanese suspects. Those arrested were taken to this Kempeitai centre to be questioned. Many locals, especially the Chinese, were beaten, subjected to water torture, and severely punished for crimes they did not commit.

I used to run away as far as possible from the scene of torture to avoid hearing the shouting, screaming and begging for mercy, which came from the house of torture. Many victims could not withstand the water torture. This was done by forcing the victims to drink water from a water hose and then were jumped and stamped on their stomachs to force out the water. This was frequently and cruelly used to force the captives to confess. The Japanese soldiers showed no sign of mercy or compassion for the dignity of mankind.

Through the three-and-a-half years of Japanese occupation in Southeast Asia, the prisoners of war, especially the British and Australian soldiers, suffered malnutrition, torture and long hours of manual work. They were forced to sweep the roads, clean the drains, cut the grass, fell the trees, repair buildings and more. They were made to work long hours under extremely harsh conditions, without sufficient food and water.

At that time, we did not have modern sanitation. The Alliance soldiers became night soil carriers under the watchful eyes of the Japanese guards. The job was done every afternoon. These groups of British and Australian prisoners would collect the dirty and smelly night soil buckets from the lavatories built outside the houses and replace them with clean buckets. They had to do this for every house under close supervision. Though the task was unbearable, they did not show any sign of emotion or flicker of an eyelid. They were so malnourished, wearing short pants, carrying two buckets of night soil across a pole on their shoulders to the waiting truck. They painfully carried on the job without a murmur. We felt very sorry for them, but dared not help them in case the Japanese guard caught us and would then severely punish us or make us help the prisoners do the job.

The reverse took place when the Japanese surrendered. It was the Japanese soldiers’ turn to do the dirty job, under the watchful eyes of the Indian soldiers who fought side-by-side with the British in India. This showed that our lives could be changed by the political situation of the country. There was no guarantee that our lives were always smooth sailing. War was cruel to civilians as well as to the military personnel. No one was spared from the horror, cruelty and suffering of war. Not only was our food in short supply, so was our clothing.

People wearing torn and tattered clothes were a common sight. Our clothes were patched again and again with thread made from pineapple leaves, which were dried and pounded into thread, but they were not lasting. Many people were not prepared for the war so they did not store sufficient clothes. My mother had a few new clothes but had to sell them to buy food and milk for my nephew and niece. She could not bear to see them crying out in hunger. She sold her clothes on the black market in exchange for the Japanese banana notes (which had a banana tree printed on them). The Japanese notes were valueless and worthless, and were only used in large quantity in Malaysia and Singapore during the Japanese Occupation.

The downfall of the Japanese

The Japanese were too reckless and ambitious. They thought they were the strongest and most powerful nation among the Asian countries. They wanted to conquer and become the master of the whole of Asia. But their advancement was stopped on their way to India, while they were in Burma. Their army suffered heavy losses in Burma against the British and Indian troops. The Japanese soldiers were not accustomed to the tropical and jungle conditions in Burma and also the language difficulties with the natives. They too suffered hunger and disease, and loss of life without adequate supply of food and ammunition from their own country or conquered countries. At home in Japan, the civilians too suffered from lack of food because whatever they had was sent to the war front to feed the soldiers.

The war came to an end on August 15, 1945 when the Allies dropped two atomic bombs on the cities of Hiroshima and Nagasaki. Thousands of Japanese civilians were killed. Japan surrendered without condition and suffered humiliation and defeat. But we were glad in our own country that the severe torment under the Japanese Occupation for three-and-a-half years had at last come to an end. Everywhere there was jubilation without fear of harassment. 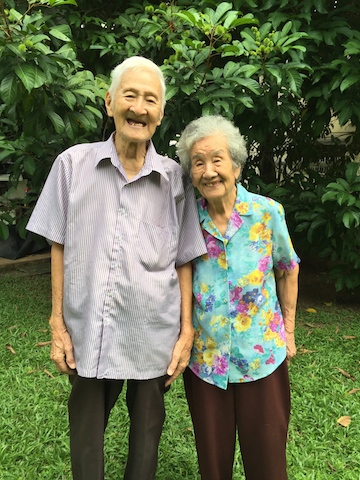 Lessons from the Japanese Occupation

The Japanese Occupation left a lasting impression on the country. It was a traumatic experience. The people went through great humiliation, suffering and deprivation from the invading enemy. During the Occupation, hunger from lack of food and lack of medical supplies during illnesses were uppermost on our minds. Out of the suffering, people showed great resilience, courage and resourcefulness, and the determination to survive. They had the fortitude to endure hardship in the darkest of hours. The life experience during the Japanese Occupation had made us wiser and thriftier. Never expect life to be rosy all the way. In case of adversity, we must be alert and face it bravely.

Though the Japanese had left us and the British had returned, there were still lots of post-war problems, which could not be immediately solved. The British Military Administration (BMA) took charge of the day-to-day administration of Malaya and Singapore. The aim was to maintain law and order, and to help in the reconstruction of the country. The most urgent problem was the shortage of food. Rice, flour and sugar were rationed although they could be bought on the black market at very high prices. Electrical blackouts at night were a frequent occurrence, which interrupted all activities. Kerosene lamps and candles were used while electricity was being restored.

Also, as a result of the war, schools all over the country faced many problems. Textbooks and teaching materials were not easily available. The nuns in the Taiping convent took great interest in the education of over-aged students who were lagging behind by three-and-a-half years. The nuns encouraged us to go back to school. I was enrolled in Secondary II though I stopped in Primary IV before the war.

Back in school again, I was determined to do my best though it was great struggle. Nothing was impossible if we had the perseverance and determination. I studied very hard to overcome all the obstacles to succeed in life. I am glad to complete my Senior Cambridge (GCE ‘O’ Level) at the Taiping Convent. I left Malaya, came to Singapore and attended a three-year Teachers’ Training course at the Singapore Teachers’ Training College at Cairnhill in 1950. After completion, I got a Physical Education scholarship to study in England for three years. I returned to Singapore and spent 35 years in the education service and retired in 1988.

Life is a long struggle and full of adventure, but as long as we know how to move in the right direction can we then succeed.

Tan Yoon Yin, 87, is grandmother of three who keeps busy gardening, tidying the house, cooking and meeting friends, and regularly attends all kinds of talks. In the past, she was the founder and president of the Women’s Netball Association and the Women’s Hockey Association.