A daughter remembers her father and what he meant to her.

The writer's father with her family.

My father passed away at the age of 82 in 2013. He is much missed especially by the six grandchildren. He was known as the ‘reliable Mr Fix-it Grandpa’ who could fix almost anything from pipes to toys, and even bruises.

When my children came home with bruises on their arms or legs, they would let grandpa know and he would take out his ever ready bottle of Chinese medicated oil and help them ‘erase’ the bruise. Frankly, I did not think they looked forward to the treatment which entailed applying the medicated oil and rubbing over the bruise with the thumbs. It was, to some extent, an extreme experience. Somehow the children did not mind going through this. Between the ‘ahhhhs’ and ‘oohhhs’ my father would ask them how they got the bruise and bonds developed through the sharing. Some teachable moments also presented themselves with my father relating his childhood stories to the children. They remembered those times as ‘pleasantly painful’. I was grateful that my father invested the time with my children.

The writer's father celebrating his birthday.

Besides attending to bruises, my father also fixed the children’s toys. Anything that was broken or not in working condition would be packed and ‘shipped’ to ‘Gong Gong’s’ (grandpa’s) house where repair works were performed. If only minor repairs were needed,  the children could get the toys back immediately. If sometimes an overhaul was necessary, then the items would only be ready during the next visit. In most cases, everyone was satisfied. Once, when my children were crazy over the reality TV show ‘Wheel of Fortune’, my father even created a mini table top ‘Wheel’ from scrap material. What a lesson on recycling and what fun we had as a family!

Looking at my children’s interaction with dad reminded me of my own childhood with him. As a shipyard fitter with my mum a part-time cleaner, supporting my grandmother and three young growing children, my dad could not provide many luxuries. Many of our toys were home-made – plastic bag kites, stones picked from roadsides, and scrap material from packaging (which was rare in those days, come to think of it). My first skipping rope was a long piece of cloth from my mother’s sewing basket. My siblings and I usually looked for our own games when my parents were busy at work. There were no game shows on TV and we were contented with whatever games were common at that time by adapting.

Dad did not create toys for us but he made household items from discarded materials in the shipyard. A number of shelves and storage space were created during his rest days from work. Long before DIY stores were popular Dad was already a frequent customer at hardware shops in Chinatown scouting for a suitable tool or the right nail to complete his home-based projects. Then it would be sawing, hammering and fixing plus polishing or painting if necessary. Things made by Dad were sturdy and long lasting for he was a skilful workman. 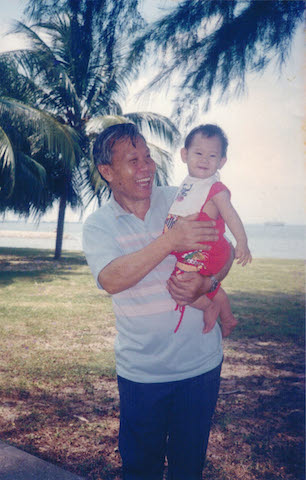 This passion to create carried on even after he has retired. When my siblings and I got married and had our own homes, Dad observed our needs and made items accordingly. He made a ‘gate’ to prevent my toddler from entering the kitchen, fixed shelves in my storeroom and bathroom, put up wall fans in my apartment and repaired leaking taps. He improvised and mended objects and furniture instead of getting rid of them straightaway. He was thrifty and prudent, and I learnt that from him early in life too.

Ever since my Mum’s passing more than 10 years ago, I had been trying to connect with Dad emotionally. He and Mum were very close, strengthened even more by Mum’s prolonged illness. He was Mum’s primary caregiver. Concerned that he would feel at a loss, I made efforts to let him know that he was much needed. Besides sharing memories and exchanging news of relatives, I sought his help and advice when something in the house needed fixing for I thought appealing to his area of competency may help him in his time of grief. As much as he was ‘Mr Fix-It’ to my children, he was that to me first. Dad’s fingerprints were everywhere in my home for I had come to depend on him for so many things.

All these would happen because my father was involved in the lives of the people he loved. One of my friends remarked after my father’s passing, “He has done well as a father and a grandfather. I am inspired to become a better father myself.” How honoured I felt to have been part of his wonderful life. Thank you, Daddy …

Evelyn Saw, 51, is the eldest of her two siblings. She was a former school teacher. At present, she teaches Bible lessons to children, does voluntary work and writes in her free time.