Having three wives was a common practice back in the old days. Tan Song Chua shares a glimpse into his childhood where this happened. 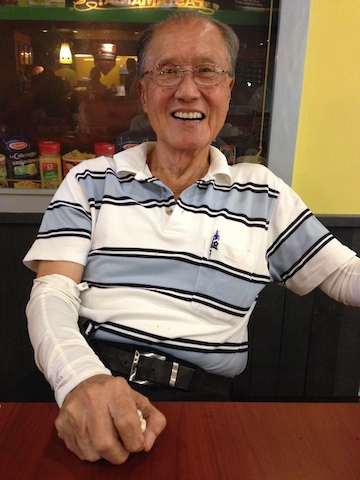 Tan Song Chua, 86, had three mothers. He shared: “If people like that, they can do it. This was normal at the time.” The father of three girls and grandfather of three added that he was part of the Number 1 wife’s family of five children – four boys and one girl – and he was the third child in the family. He was also very close to his mother.

When his father came to Singapore from China (before Song Chua was born), an auntie introduced him to a Peranakan woman who would later be his second wife. Though it was a hard pill to swallow, his mother learned to accept it. However, when his father asked her to come and live in Singapore, his Number 2 wife was unhappy, but she too learned to accept the situation and the wives lived in harmony under the same roof. “As long as the second wife respected the first and the first wife treated her with respect, all was ok,” explained Song Chua.

However, two was not enough. His father wanted to take on another wife but before he could marry her and make it official, he passed on. His mother felt it was important to do the right thing and asked her whether she wanted to be a part of the family. When she responded with a ‘yes’, she was “officially” taken in and became known as the third wife. Though there was no paperwork, the family knew it was an agreement that everyone had to respect.

Both second and third wives had no children. “Before I started working and when my father already passed on, my mother told me that if anything happened to her, I had to take care of the two other ‘mothers’,” said Song Chua. And he abided by this request. When he moved to a house and was married, his mother and the two other mothers stayed with him.

“If I didn’t take care of them, who would take care of them?” he asked. He even covered their medical expenses, with some help from his brothers. “At the time, the old Chinese custom was when girls got married, they would focus on their own families, while the boys had the responsibility to look after the family.”

Song Chua, who worked with Shell in marketing for 30 years, remembers that after his retirement when the third wife had passed away, he had just landed in New York on his holiday. He then received the news and took the next plane straight back to Singapore. He added that on his father’s wooden tablet in the temple, the third wife’s name was engraved to show the world that she was accepted into the family and was one of the wives.

Family bonds not as strong today

Song Chua strongly believes in the importance of family, and credits studying Chinese classics for a short time for having influenced him. However, today, family bonds are not as strong compared to his generation. “You need to accept the changes in this world; you cannot stick to the old ways [even if you want to]. If you do, you will get frustrated and die sooner.”

Though his own family situation is not the most ideal, he has accepted it. His family (his eldest daughter is based in New York) gathers mainly during special occasions as “everyone has their own lives”, he explains. “And furthermore, even having children these days doesn’t mean they will look after you. They are educated differently as well. This is normal; I am not blaming them. They have to live their own ways as everyone is living that way. It can’t be helped.”