A 79-year-old grandfather of two shares about his retirements and where he currently finds meaning in his life. 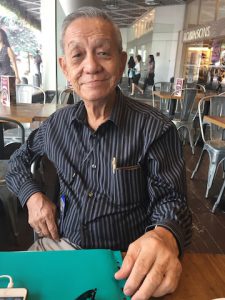 I have had three retirements. In the 1960, I was a full-fledged marine radio officer. I had taken a course in radio telephony and received a certificate. After which, I went to sea and worked on board a merchant ship as a radio-telephone operator. My job was basically to send the daily positions of the ship to the ship’s owner, who I was working with.

At the same time, all the equipment was in my cabin which meant I worked eight hours each day and listened to distress frequencies, meaning if other ships were in distress, we could communicate with them and provide the necessary assistance. I also had to send the estimated arrival time to the destination where the ship was going, to the agent. Everyday, I also received weather reports for the ship captain, which had to be delivered to him.

I was usually on the home-trade route (there were three routes – foreign-trade which went to Europe; home-trade which focused on Asia for example China, Australia, Indonesia, Thailand, Philippines and Cambodia; and local-trade which focused on nearby routes like Penang, Saigon and certain areas of Indonesia like Ria Island and Malaysia). I chose this route, as I wanted to be near my family. I was married in 1959 and had three children.

When the vessel touched into the Singapore port for four to five days to discharge or unload cargo, or dry-dock for maintenance work, I would then be off. On an average about 10 days to two weeks being out at sea, I would then return to Singapore. My radio station was only on when the ship was at sea so there wasn’t much for me to do otherwise. Discharging and loading takes about five days. I was usually on a cargo ship carrying mainly general items, sometimes pigs for instance, going from Bali to Singapore.

I remembered once the exporter would give us officers a roast suckling pig whenever we loaded their pigs, and we got to enjoy our dinner with beer. Sometimes we even loaded cows. The deck crew was very busy, as they would have to constantly clean the shit! I served for 25 years. Sometimes I was not happy with the route, I would resign or my wife would give birth and I would “sign off” (resign) from the ship. I worked for five companies before finally “retiring” from the sea in 1984.

Next, I joined a freight forwarding agent with Mac-Nels Warehousing Co (where they would store the cargo for others) and I worked as a warehouse clerk. The first few years was tough as I missed being at sea. I liked the weather at sea, there was no pollution and there was only clean air, and I also missed the different types of cultures. I enjoyed certain sightseeing such as in Bangkok, I would get to see the floating market and I found the candle dance fascinating.

I worked for Mac-Nels for one year and found it very stressful. I had to calculate the store rents. Certain days, there would be certain rates. I had to make sure the transport company received the right cargo from my warehouse to the importer. At the same time, I had to do administrative work and sometimes if the contractor was short of tally-clerks, I had to jump in once in awhile to help. When a container arrived in the warehouse, I would discharge the cargo and made sure it was loaded with whatever goods for export. When loading was done, I needed to arrange with the customs officer, who would be located next to warehouse, to seal the container and I had to be a witness.

After Mac-Nels, I wanted to join the civil service and as such, felt I needed to learn the PC. At the age of 50, I took up a basic computer class and bought a handbook on how to operate a computer. Some elderly find life boring and negative but there are many things that they can do and they shouldn’t stay at home and sit at a coffee shop all the time. You need to live your life meaningfully and you need to find ways to do so.

So after mastering the computer and before I could get a job in civil service, I took up a job as a security warden at SATS (Singapore Airport Terminal Services), a subsidiary of SIA, in the department of auxiliary police. My job scope was to attend to SIA planes only upon their arrival. When a plane arrived, we had to board it after the passengers came off. We would go in pairs and had to liaise with the cabin crew. Our duties was to check the saleable items on the sales cart that sold cigarettes, perfume, etc, on the flight. We had to check that the amounts received tallied and the items hadn’t gone missing or there was a shortfall. If there was a shortfall, we would have to make a report.

After checking, we would then have to seal the sales cart and leave the plane while the cart was escorted to the storeroom. I worked there from 1985 to 1991. When I was at SATS, I was elected by the union secretary to be the shop steward to represent my department so I could bring up issues relating to staff welfare. During my tenure, I brought up issues like unsafe bicycles used on the job and getting a sofa rather than a bench to rest. I felt management should take care of the welfare of their staff.

When I was 55, I was asked to retire but I wouldn’t go quietly so I started working next with MINDEF as a corporate support officer doing registry work and dispatch on the computer, and filing needs in the storeroom. I was also in charge of logistics like the fax and copy machine and if it need servicing, I had to settle it. I finally retired in 2000 at the age 63. 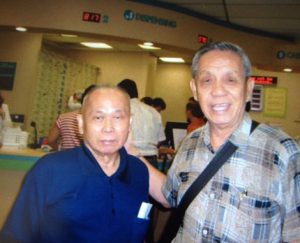 Again, I found I didn’t want to retire and wanted to keep on working. I found that there is no end to learning. In 2004, I was invited to be a part-time caregiver for WeCare4u Family Services at Upper Thomson Road and it was perfect timing, as I had nothing to do at the time. I continue doing this work today but not as much as there is a lot of competition in the market for these kinds of services. Last year alone, I have helped four patients.

My duties is to escort them from Ang Mo Kio Community Hospital to restructured hospitals such as TTSH, CGH, SGH, KTPH, etc, as and when I am needed. I would help them get registered at the hospital and stay with them during their appointments. Most of the patients are elderly and diabetic or with heart conditions. I really enjoy the work. I find since I am elderly and they are elderly, I can cheer them up, talk to them and support them spiritually, give them encouragement and tell them not feel negative about their sickness.

Of all the patients I have dealt with, the one that I remember the most is when I was caring for a 90-year-old Indian private patient, who I escorted to various appointments four times including the National Skin Centre, a nursing home in Bukit Batok and SGH. He was a simple man and very understanding. One time, when he was going to see a doctor at the Skin Centre, he was waiting and I bought him tea. After he had an injection, the nurse didn’t put the plaster on properly and I noticed that blood had seeped onto his T-shirt. I brought it up with the nurse and in the end, she got him a new T-shirt and apologised to him, and that made him happy.

After my last escort with him, the doctor told him he had cancer and was in the final stage. I went to talk to him and told him I was sorry to hear this and he replied that he was in his 90s and ready to go home. I then told him God would take him to the eternal home where there is no sickness and one day I would meet him there. This comforted him. When he ended up at the Assisi Hospice, his daughter informed me and I paid him a visit and took photos of him, which I gave him copies. I made several visits to see him before he passed away. I felt sad as he was a nice person.

About a month after his death, his daughter called me to have tea and she handed me a letter from her father. He wrote it before he died and thanked me for my kindness and patience, and said he had nothing to give me in return but to pray for me. He also left behind a S$50 note. I told his daughter that I couldn’t take it but she insisted. It is not the money that I was happy about but the appreciation of my company. He also appreciated the tea that I had bought!

I am happy serving the sick. I don’t get paid much; for three hours I get a minimum of S$35. I find that life can be meaningful doing the work I do. When I help them, I feel inner peace. One patient once said to me that when someone new talks to him, he is happy as sometimes the nurses don’t have the time to talk to him.