Michael Wong, a recipient of the 2016 Singapore Patient Caregiver Award, is a cancer survivor who juggles his roles as a volunteer at TTSH and caregiving his wife who has dementia. 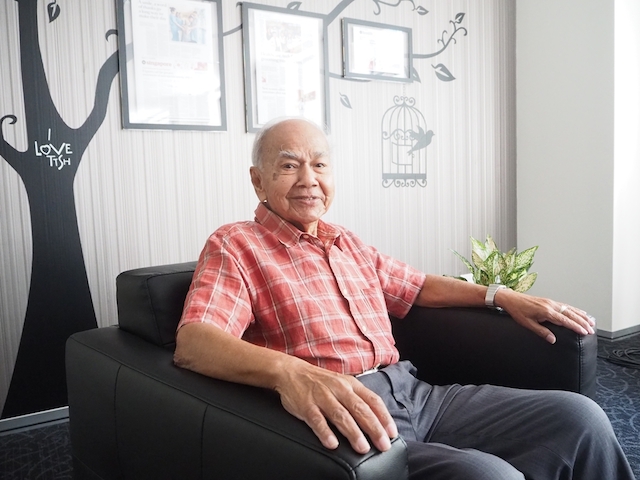 “I always care about people more than myself,” shared 78-year-old Michael Wong, a retired civil servant. When his in-laws were stricken with cancer, he looked after them. And, when his mother was around, it was he who took care of her. It is no wonder he lived up to being the favourite son! Even, when his mother’s godmother was at Little Sisters of the Poor Home For The Aged, Michael at the age of 15 would cycle every evening to Upper Thomson Road to deliver her dinner in a tiffin.

These days, he is focused on taking care of his 70-year-old wife, Monica, who has been diagnosed with dementia, with help from a live-in trained nurse. He knew early on that something was wrong but he chalked it up to normal ageing. “She was in charge of the finances at home and would pay the bills on-time. However, in the middle of 2013, I started getting reminders from like PUB (utilities) and this never happened before,” shared Michael. When he confronted her about this, she would give him different answers.

Then came the behavioural changes. Michael shared that one time, some relatives came over to their home and Monica didn’t acknowledge them. “My son and I thought there was friction, but it wasn’t that.” Concerned, he took her to the National Neuroscience Institute (NNI) in 2013 and the doctor conducted a scan of her brain which showed she had severe dementia. In disbelief, he got a second opinion from a doctor at Gleneagles Hospital, who gave the same diagnosis, and so she started taking medication which helps to slow down the brain from deterioration and keeps her calm.

Initially, the diagnosis was hard to stomach for the family. “My son and I were very down and had a hard time accepting that my wife had dementia. We really had to come to terms with it as it is all part of life. [For me] I have a strong fighting spirit and by nature, I have a lot of inner strength. Before the helper came in 2014, I could barely go out at all and I had to get my son to get food.” When the Myanmar helper came, things became a lot easier, however, after a short while she had to leave as her mother had suffered a stroke and so her cousin, a trained nurse, came to pick up her duties.

But things were not always smooth. In mid-2014, Monica contracted a virus and was hospitalised. Michael thought that she would not make it but she survived. He shared that when “one person is sick, five people suffer”. He refused to disturb other family members besides his son to pitch in as he felt “we should carry our own burden and we were okay as we have some means”. During that time, she was given a feeding tube and a urine bag, which were later removed in November that year.

“After her discharge from the hospital, she was quite stable, however, with dementia patients, you never know as some days can be good or bad,” said Michael. Even though she has severe dementia, he shared she is very calm and if she doesn’t like something, she will gesture.

“She gives us a signal when she wants to go to the room after feeding. Every morning after 7am feeding, I bring her to the garden for half an hour. I talk to her and she looks around. When cats run by, she laughs. After the 6pm feeding, I also bring her down on alternate days for half an hour. I think she enjoys going out.” Michael also shared that if she doesn’t have a good sleep, her mood will change. Overall she is quite stable, he explained.

Last year, she was back in the hospital for a week. “She had fallen and hit her head and it was bleeding. I had gone out of the room to get something. I felt guilty; thank goodness, it was nothing serious.” His son comes over every Sunday and also helps financially.

Doing his own thing

Michael said to other caregivers: “Don’t take caregiving as the main duty. Caregiving is only one of the jobs but not the only job or responsibility. A good caregiver is a healthy caregiver.” As such, he makes it a point to carve out his own time each week.

“Though I try to be home as much as possible, Wednesday morning is the only time for me to do volunteering. I want to stay as active as I can and help others.” Since 2013, he has been a Patient Support Group volunteer at Tan Tock Seng Hospital (TTSH), where he counsels patients with colon cancer. “When I am able to share, I am very happy. When I see their positive body language, I feel I have accomplished what I had set out to help. They get lifted and more confident to handle their sickness,” he said.

“We tell them they are not the only ones with cancer as there are many. We tell them cancer is not death. Medicine is so modern these days and doctors are so advanced, and that now at Stage 4, people are still living, sometimes more than 10 years. Doctors play 20 percent of the role but the rest is up to you. Don’t worry 100 percent, only worry five percent. Not to worry is not possible.” He also accompanies the patients for their appointments, and visits the wards with flowers and words of encouragement.

At age 72, Michael had Stage 1 colon cancer in 2010. “I brought a friend to TTSH and saw a poster on colon cancer where it showed the five signs including bleeding in stools and irregular bowel movement. I had three of the symptoms. When I did a colonoscopy, I found out I had colon cancer.” He skipped chemotherapy and radiotherapy, and opted for surgery and an external stoma bag. He stayed in the hospital for a week and had the stoma for five months. Today, he continues to get screened and said, “So far, so good.”

When he got the news about his colon cancer, he didn’t even tell his wife. “I didn’t want her to get panicky as she would then get sick.” It was only much later that he told her.

On the other days that he is not volunteering, he attends the Colon Cancer Support Group (one of the eight members is someone who counselled him when he got the news he had colon cancer) at TTSH. He also “meets with my old kampung boys, the oldest being 84 years old, at Beach Road to talk nonsense, and I look into an ex-colleague who is 92 and has bladder cancer.”

In the early days 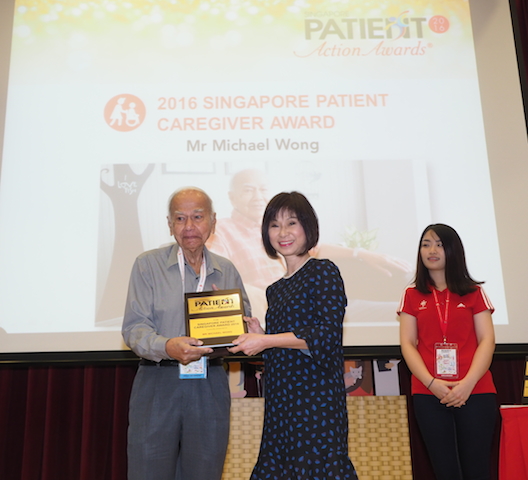 Talking about Monica, Michael shared it was a good friend who introduced him to her in 1967. She was working in the same department as his friend’s wife. Though he had no intention of getting married, Monica changed his mind and in 1971, they got married. It was also partly due to some pressure from his mother who wanted her son to get married. “All my brothers were married,” he said, and with him being the favourite son, he couldn’t bear to disappoint her.

Throughout their married life, she was often home-bound and kept to her books and TV. It was a trip one time to southern Thailand where they took in the different food and the shopping that got her hooked and they then went away for short trips to Malaysia. Now home-bound, Michael has no regrets. He treasures the memories he has had with his wife and now in another phase of life and roles switched, he has learned a lot from caregiving her. Last year, he was given TTSH’s Singapore Patient Caregiver Award (Individual) with two others. “You need to be patient and to treat the person as a person. Keep in mind, it is dementia that makes the person behave the way she does, not the person itself.”

He added: “A caregiver must have a heart of gold and strength of steel as you need to be strong-willed to deal with the ups and downs that come with caregiving. And also, you need remain optimistic.”