A senior shares three interesting stories involving his many years working in the Singapore Police Force. 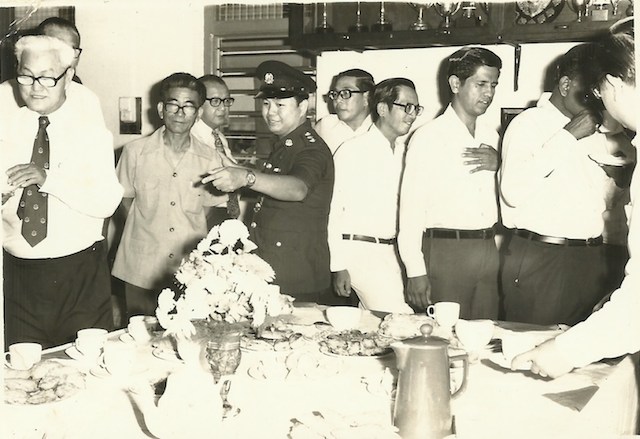 Clement Tan with some Residents' Committee members while he was at the Joo Chiat Police Station.

Clement Tan, 75, couldn’t help sharing his many stories as a policeman. He was with the Singapore Police Force (SPF) (regular service) for 25 years from being a police constable to inspector, and with SPF’s volunteer service for another 15 years.

He shared that there was one case he just couldn’t forget that happened in the late ’60s or early ’70s and involved the director of the then National Library Board (NLB) at Fort Canning. She had received an extortion letter from a gang called Brotherhood, who had threatened to kidnap her only daughter if their demands for S$10,000 were not met.

She was to place the money in a wrapped old newspaper and put it in the dustbin in the old Robinson’s (which was at Raffles Place) the following morning after she received the extortion letter. The Brotherhood warned that she would be watched every minute and told her not to report it to the police.

Frightened and fearful of losing her daughter, she telephoned Clement’s officer in charge of the Central Police Station and was “thus ‘arrowed’ with the case as I was the duty investigating officer of the day”. He shared, “Given such a short period of time, I sprang to action and hatched a plan that was to bring a speedy closure to the case.”

He phoned her to meet him in the afternoon at a church at Victoria Street where he met her with his wife (as a decoy). He handed her a note of instructions and he then left the church with his wife, after saying a short prayer to the Lord. He rushed back to the Station and collected a few Indian detectives who he briefed on their respective ‘roles’ in this project ‘Brotherhood’, as he called it.

The following morning, he drove his car with his AIO (assistant investigating officer) and they took up positions at Robinson’s. Around 7am, the NLB director was seen walking towards the front of Robinson’s with one of the WPCs (woman police constables) in mufti (plainclothes). “Unknown to most people, there were several ‘new’ sweepers sweeping the grounds fronting Robinson’s. The NLB director and the WPC left the spot after placing the loot in the bin. Twenty minutes later, a young Malay youth came and rummaged through the bin. Upon trying to leave the vicinity after acquiring the loot, he found himself pounced upon by several new sweepers from the Central Police Station. Frankly, when I saw his face that day, my heart melted. He looked like a hunted animal.” 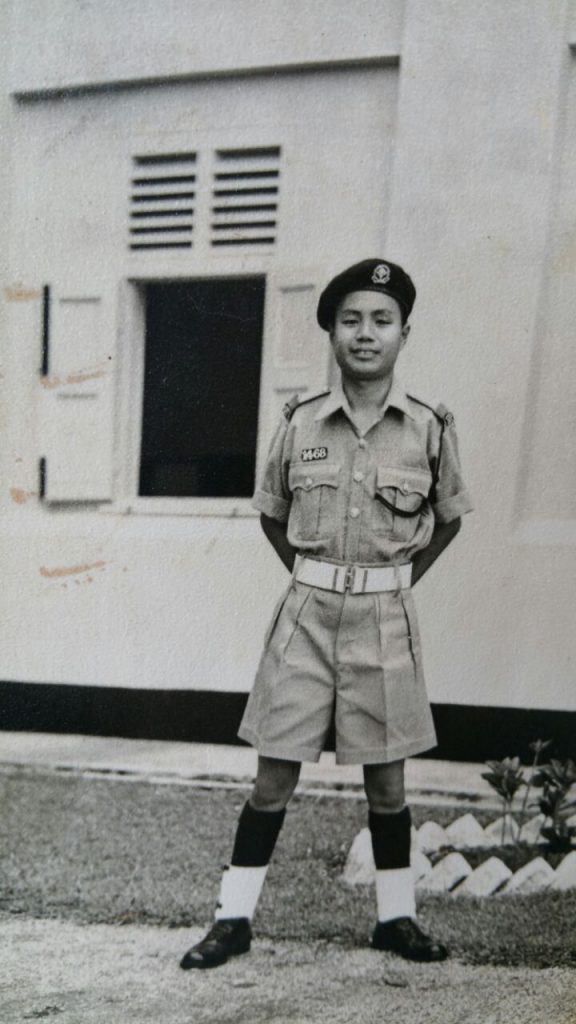 Back at the Station, Clement shared that it was discovered that the youth was a former office boy at NLB. “The poor guy was convicted for extortion by letter, and jailed. The NLB director wrote a letter of appreciation to our Commissioner for the good work done by our men and me.”

In the 1970s while Clement was a Routine Officer (RO) with the Beach Road Police Station, there was a case of a tang-ki (Hokkien word for Chinese spirit mediums) procession, which had stalled and refused to move, blocking the whole Liang Seah Street. “And to make matters worse, this happened around noon during lunchtime!” he said.

As he was the RO of that day, he donned his uniform and drove to the scene in a police marked car. On arrival, he saw four to five Chinese men “who were carrying and jolting a rattan chariot wildly (with the tank-ki sitting on it) as if it was remotely monitored by some external unknown forces!” “The whole procession was blocking a whole road stretch of vehicles,” said Clement.

He immediately summoned the organiser of the procession to find out what the problem was for the blockage. The organiser, a 60-year-old Chinese guy, explained that they had come across a section of the street where overhead hung some lady’s lingerie and the owner could not be located to remove the items. “At that point of time, a number of impatient vehicles were hooting their horns incessantly. Frankly, I was quite pissed off with such an ancient superstitious explanation and yelled at him and asked him if he had a permit [in the first place] to hold such a procession, of which he denied applying.”

Clement then asked him for his NRIC, which he instantly furnished, and he warned the man that he would return to the scene in about 10 minutes with an ang chia (the SPF Reserve Unit red van for arresting rioters, gangland hoodlums, etc). After getting the NRIC, Clement drove back to the Station to have a quick cup of tea at the canteen there.

Ten to 15 minutes later, he went back to the scene and found not a single entity of the tang-ki procession in sight, except for the lingerie still hanging overhead. As he was about to leave the scene, he received a walkie-talkie message from his Station telling him that the organiser was begging for the return of his NRIC and to be excused from the offences he had allegedly committed. 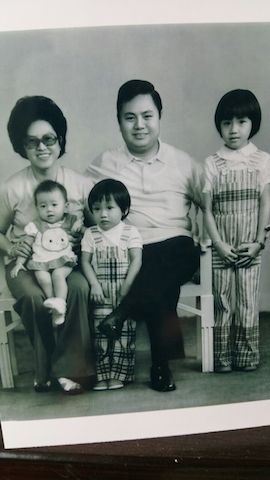 Clement with his wife and children.

“Back at the Station, I yelled at him again, gave him a warning and returned his NRIC. I remembered him clasping both his hands like what Buddhist devotees do and saying a hundred thank-yous!” said Clement.

** If you missed Clement’s detailed story about why he wanted to be a policeman, you can read it HERE.