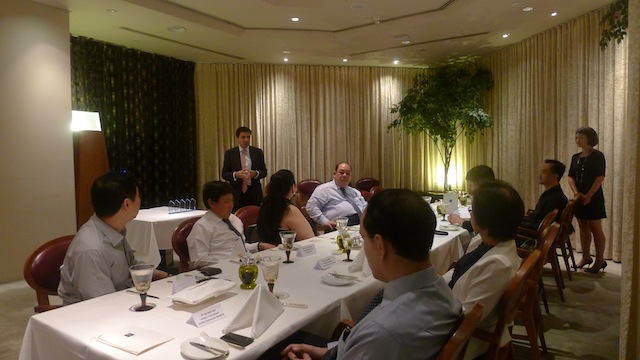 As part of the inaugural CEO Screen For Hope campaign, the local business leaders took on the role of leadership advocates with each sponsoring a colonoscopy procedure at FCH, Singapore and Southeast’s Asia first and only facility dedicated to colorectal disease care and management. Four of these advocates had also chosen to lead by example, by undergoing the colonoscopy themselves.

Switer Engineering’s Tan hoped that through this initiative, he could share his colonoscopy experience and help others alleviate their fear of the procedure. “I had my own reservations about colonoscopy prior to this. Unlike how I had imagined the procedure to be, it was near painless and with very minimal discomfort. Most importantly, it gave me an immense piece of mind knowing that I have done my check for this number one cancer in Singapore.”

Ong from Wärtsilä Singapore said that he did not hesitate to lend his support despite having gone for his regular colonoscopy last year. He had sponsored colonoscopy procedures for his senior management team, in hopes of encouraging more employees to consider early colorectal cancer screening.

He added: “This is a great initiative to complement the Colorectal Cancer Awareness Month campaign at the national level. I am grateful for the chance to be part of CEO Screen For Hope, and I urge more organisations to come forward to help increase Singaporeans’ awareness of colorectal cancer prevention.” 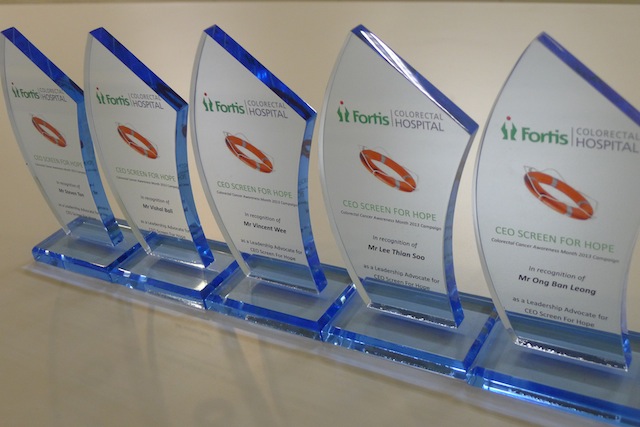 Tokens of appreciation to the leadership advocates.

The proceeds gathered from the Screen For Hope initiative were presented to SCS during an intimate appreciation luncheon. Besides enlisting the business leaders, during the month of March, FCH touched close to 10,000 individuals through roadshows, health talks and its parallel corporate outreach efforts for Screen For Hope. Participating organisations such as DHL Supply Chain Singapore, Hewlett-Packard Singapore and STMicroelectronics had helped disseminate and/or display colorectal cancer-related information within their workplaces to provide information on the condition and the importance of early screening, diagnosis and treatment.

Colorectal cancer – also commonly known as bowel cancer – is widely known as a “silent” disease. The signs and symptoms of this cancer may not show up in the early stages, and patients are often diagnosed only in the later stages of the disease. Colorectal cancer is the most frequently occurring cancer among men and the second-most commonly occurring cancer in women here in Singapore, but is also one of the most preventable cancers with early screening. Colonoscopy is the most effective screening test for colorectal cancer as it allows for the immediate removal of polyps if detected.