NUSS and SACE held a symposium that touched on myths of ageing and that seniors should advocate for themselves. 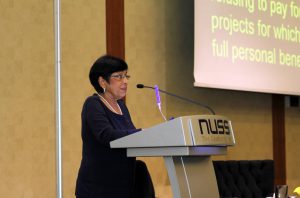 Dr Kanwaljit Soin giving her keynote address at the symposium.

Dr Kanwaljit Soin, an orthopaedic and hand surgeon, shared in a keynote address during the “Seniors Revalued Symposium” that by 2030, Singapore will join 33 countries to become “super-aged” societies. She added that those starting businesses should focus on “wrinkles than creams for pimples”. The symposium, which was held in April, was organised by NUSS and SACE.

Her address touched on the myths of ageing and how society devalues seniors. She further added that leaders in various countries are concerned about the shrinking labour force and the increasing dependency ratio – “the dependency ratio is down as fewer children to look after [the older].” 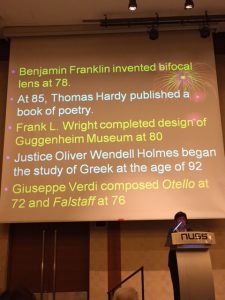 Dr Soin shared about the achievements of some famous seniors.

In her address, she questioned whether there is a need for a retirement age (which currently stands at 62, however, employers are required to offer re-employment to eligible employees who turn 62, up to age 65, to continue their employment in the organisation) and that “we should work for as long as we can and as long as we want.” Dr Soin said that more and more older persons are working and they are far from being unproductive (another myth of seniors), however, they continue to face discrimination. She suggested maybe on applications for jobs, there is a need to eliminate putting our gender or age.

She also highlighted the sources of income support in old-age including public transfers from taxes such as the Silver Support Scheme (which supplements the incomes of lifelong low-income seniors who have less retirement support), private or familial transfers, and asset-based allocations like stocks and shares. “We use these for our old-age and we don’t depend on others. It is enough for us to [use] to satisfy our own needs and we don’t hanker for more,” said Dr Soin. “[Actually] cash flows more from older members to younger members! Older persons help consumption when we spend and we are helping the economy.”

She continued: “Older people are not seen as a potential resource and [they are seen as] needing more assistance. They are seen to be forgetful, slow thinkers and not very interesting. However, this is where the seniors can trump the youth because of ‘crystallised intelligence’.” She is talking about a term defined as the ability to use skills, knowledge and experience, and improves somewhat with age, as experiences tend to expand one’s knowledge.

So why have seniors been devalued? The underlying reason is ageing. “How can this be, when it is prejudice against your older self. All of us will become older if we are lucky. Ageism has serious consequences for older people and society at large,” remarked Dr Soin, who then highlighted another stereotype that older persons have to pay higher car insurance when “we don’t go out at night as we can’t see well and [it is the] youths who have flashy cars” and should be paying higher premiums.

She added: “We are not old and nothing else, we dress up, travel, drink wine, surf the net and have sex!” Dr Soin suggested that maybe ageism stems from our fear of dying and old age is seen as a prelude to death. She concluded that we should give children a young Barbie as well as an old Barbie, so they grow up to understand the life cycle, and hopefully end the myths and stereotypes against those older.

The next speaker, psychologist Dr Elizabeth Nair, further added to Dr Soin’s address and highlighted more myths of ageing from the younger generation, employers and general public, such as the following: 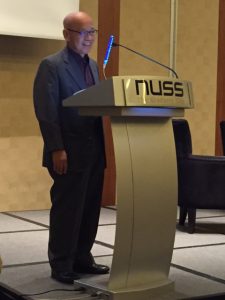 Dr William Wan, 69, the general-secretary of the Singapore Kindness Movement and an active Facebooker, was the speaker after Dr Nair and said that “the way to connect with young people is to get into their world and they will welcome us and we can connect to them”. He added: “There is one thing we have that younger people don’t have and that is experience. Wisdom comes from experience.”

He debunked one of the myths that older people cannot have friends. “Friends I have made in the last five years have become good friends,” he shared. He also noted that he continues to stay active, debunking another myth that seniors are unproductive – at age 61, he did skydiving; at 62, he did snipe sail boating; and at 63, he did scuba diving. He added: “Be whoever you want to be and be happy.”

The situation Down Under

On the second day of the symposium, the president of U3A in Toowoomba (west of Brisbane), Australia, Rhonda Weston, shared about the public image of seniors. She is part of a growing group in Australia and her group, which has more than 1,600 members with the oldest member being 101, offers 160 classes/activities each week and is run entirely by volunteers. “Seniors are [considered] past their ‘use by date’.” She noted that older people are refused employment especially if they are 12 months out of a job. In the long-term, this affects them including anger management, depression, financial hardship and emotional issues.

She also shared that children leave home and move across the world, and this means, less help for their families. She also touched on elder abuse including financial abuse, such as being forced to change seniors’ Wills by another person who they have a relationship, thus affecting trust. “Seniors are also being overlooked in stores because of their age. Seniors are [considered] invisible,” said Rhonda. 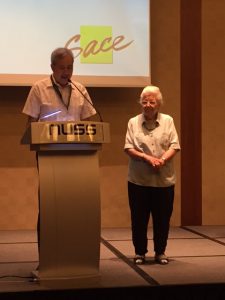 During the symposium, Ann Wee, who will be 90 soon, was conferred with the Third Ager of the Year award by U3A.

On the same vein, she shared that older people are often unrepresented in the media in Australia, particularly in year 2012. “People 65 and older feature in only 4.7 percent of advertising content and 6.6 percent of editorial content, when people 65 and older make up 14.2 percent of the population.”

She further remarked that those 65 and over receive little attention from retailers, compared to the young. “Besides mobility aids, which we are the target market (and funeral homes), there is very little of lifestyle choices which have a positive outcome,” said Rhonda, who added, “we live in the world, which is youth-obsessed”.

“Seniors have not grown up with technology so they are concerned about the legal use of their images and information. … They have anxiety into learning so much different technology,” explained Rhonda. She added that seniors are also scam targets. “They have a nest eggs and a good credit rating, and this makes them attractive to con artists. … And less likely to report as they don’t know who to report to or are too embarrassed to report it.” She also touched on seniors having slow cognitive ability such as in driving. With ageing brings medications and this can impair their abilities. She shared that in her homeland, accidents rise with age especially after 75.

During a panel discussion, Dr Soin shared that seniors should fight for their rights in a gentle manner. “We must stand together, influence media, youth, government and each other.” She added a need to focus on the positives.

Agreed Dr Nair, “Advocate and make a difference. Engage in whatever we want and have control of our choices, and we are well on our way to being happy. Look for the good in the bad. There are bad things that happen when we age and if we look, we can find some good.” Added another speaker Adrian Teo, who did a self-evaluation exercise with the audience on the second day of the symposium, “If it is to be, it is up to me.”