A US theatre and concert group of seniors aged 73 to 89 takes to the stage during Singapore Arts Festival, supported by a founder who has been with them for 30 years.

At this year’s Singapore Arts Festival, stereotypes will be broken. A US theatre and concert group of golden agers from 73 to 89 called Young@Heart will be taking the stage and belting out songs by legendary bands and iconic musicians like Red Hot Chili Peppers, Velvet Underground, Bon Jovi, Blondie and Bob Dylan. The group will be on stage for its production called “End of the Road” from May 23 to 26 at the SOTA Drama Theatre. 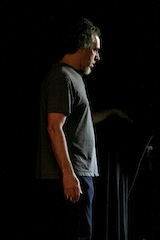 Agelessonline talks to the group’s founder, Bob Cilman, 59, (left) about why he started the group (where he is paid), what he has learned about his ageing and why such a group is so important to its cast members:

What made you and Judith Sharpe start Young@Heart in 1982?

I met her at a show I was producing. She came up to me and introduced herself. She offered her services to play the piano at a sing-along. I worked at a meal site for low-income elders where we served meals for US$0.75 (approximately S$0.94) to people over 60. A sing-along seemed like a good idea to break up the routine.

You were then 29 and Judith?

You have also gotten older with the group – what have you learned from the group about ageing and about yourself?

There’s no stopping it. I’m not sure I’m ageing as well as many of the people who have been in the group. Maybe when I get to retire from my day job as director of the Northampton Arts Council, I could find an equally enjoyable activity as Young@Heart.

You have seen a lot through the 30 years including a number of the seniors’ passing. That must be very hard. What are your thoughts on this and what makes you keep doing it over and over again?

There’s no avoiding this either. Each passing is different. Some members are ready to go, some aren’t. I’ve always been impressed that people keep coming to our group. I’m never bored of the challenges of new people and new songs. When I do get bored, I will stop but the group won’t.

Can you share two memorable cast members including Anna Main? How many initial cast members did you have besides Anna?

The group has always been around 25 people, although lately we have many more than that attending rehearsals. People are living longer, although two of our original members, Anna Main and Diamond Lillian Aubrey, lived to 100 and 96 respectively. They were both from the World War I generation – the not-quite-ready-to-be-the-greatest-generation – generation.

I adored the early pioneers of Young@Heart. They were wacky. They had the funniest expressions and they didn’t care very much about where the group was going. No self-importance. Some of the most interesting work came out of the early days.

Young@Heart chorus in "End of the Road".

You have had a number of productions with Roy Faudree’s group, No Theater. Can you explain your collaboration with them?

No Theater wasn’t a senior group when I first met them and we started working together back in 1983. We’ve all become much older. They create experimental theatre, sometimes they do that with us, but they do loads of other work as well without us.

Young@Heart also doesn’t only do theatre, we also have concert shows. (They both are all music. The theatre shows are staged with costumes and sets while the concerts are just stand and deliver.)

No Theater was involved in our first staged production called “Stompin’ at the Salvo” in 1983. We collaborated again on a large theatre piece in our community called “Louis Lou I: A Revolting Musical”. It was a retelling of the French Revolution set in Las Vegas using the songs of Sinatra.

In 1997, we started touring our collaborative roadshows. “Road to Heaven” ran from 1997 to 2004. It was set in a surrealistic nursing home and used many songs we had developed in earlier shows. “Road to Nowhere” ran from 2004 to 2007 and was performed on a set that resembled our rehearsal space in a community centre. The show was about working past your retirement years. “End of the Road” was first performed in 2009 and was created by No Theater to be performed by Young@Heart. Storylines evolve through the lyrics of the songs and the picture that is created on stage is by the directors of No Theater, Roy Faudree and Sheena See.

How many live shows have you had since you started?

How does it work – you have a new live show every year?

No. We run our theatre shows and concert shows for many years. In the old days, we did a new theatre collaboration almost every year with groups (such as break dancers, gay men’s chorus, Cambodian singers and dancers, Latino youth group, gospel chorus, college a capella groups and others) in our town. We stopped doing that in 1995 because we started touring in Europe twice a year with No Theater. 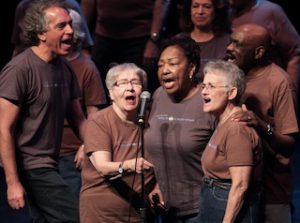 How many cast members do you currently have?

There are about 37 people coming to rehearsal. We have around 23 cast members for the theatre work and 29 members for the concerts. That’s just the elders and not the band.

And what about the schedule they keep – is a show once a month?

It varies. After Singapore, we have a show in Hartford, Connecticut (June). Then we tour to Colorado (August), then Japan (September), then Boston and Cape Cod, and after that some local shows (October). We’re setting up shows in Maine, New England; England; Holland and possibly Norway for 2013.

You mentioned you are breaking stereotypes, what stereotypes are those?

Typically older people are use to being entertained, not being the entertainers. This really plays out in an interesting way for the group. In America, venues pride themselves in being accessible. But that often means their house has been updated so the audience has a much easier time getting in and out. Their backstage, on the other hand, can be a nightmare. They didn’t see us coming and they never figured that the stage needed to be made accessible.

I guess that means you have updated a number of stages at home! Is this scenario playing out overseas too that you noticed?

The stage we use at home is manageable, although not exactly accessible. The best theatres we have found for performers backstage were in Japan.

How well-received are you overseas and at home in the US?

With having a cast from the ages of 73 to 89, doesn’t that lend itself to some challenges?

You just need to come along on a tour. Our concerns are very different than most travelling arts organisations. Safety and health are our major concerns. The cast has, over the years, learned to travel very well. The first time we travelled, it was such a scary proposition. Everything went fine, but we were nervous about this new kind of travel. We actually brought a doctor with us and he was the only one who got sick!

Because we have done it so many times now, we have developed a certain protocol for travel. That being said, we can never let our guard down.

Who is the oldest and youngest in the group?

Dora Morrow and Jean Florio are the oldest at 90, while Eileen Litke is the youngest at 73.

Have you ever had to cancel a show?

Only because of weather and only twice in our hometown.

What are also some benefits to having an older cast?

They show up early in the morning and rehearse. Typically, it is two hours, twice a week. For the most part, they really want to be there. They aren’t individuals looking for their big break.

When a new cast member joins in, what initiation do they go through?

We have new people sing for the group the first time they show up. It takes a long time to figure out whether there is a good fit. It’s a tricky one and we struggle with this a lot.

What happens if they can sing, but they can’t act?

We’ve had that and it can work out well. But it’s not acting in the traditional sense. It’s more about being interesting on stage and not demanding a lot of attention.

How do you get new cast members?

Almost always they just walk in the door. We did encourage one member we saw first at the post office. I think it was her long flowing white hair that caught our administrator’s eye.

Why do the elders join your group?

There are many reasons. It’s a chance for them to do something in their retirement that they may have wanted to do as a career. Some enjoy the challenging work. It’s all over the map. I’m sure they would all tell you that they have benefitted by being in the group.

You already have a documentary and a CD and I see with this year being your 30th anniversary, you have new T-shirts. What else are you planning?

We are doing three shows in our hometown to celebrate the 30th and we are planning an exhibit at the local library of photos, costumes, banners, posters, etc. We are also putting out a new CD and a tour book for the concert shows.

Are you the only theatre group in the US for seniors?

Have you considered having branches of Young@Heart in other big locales in the US?

See more on Young@Heart in an interview with Roy Faudree on the next page.