A Drama Box experience that bonds seniors and children over food. 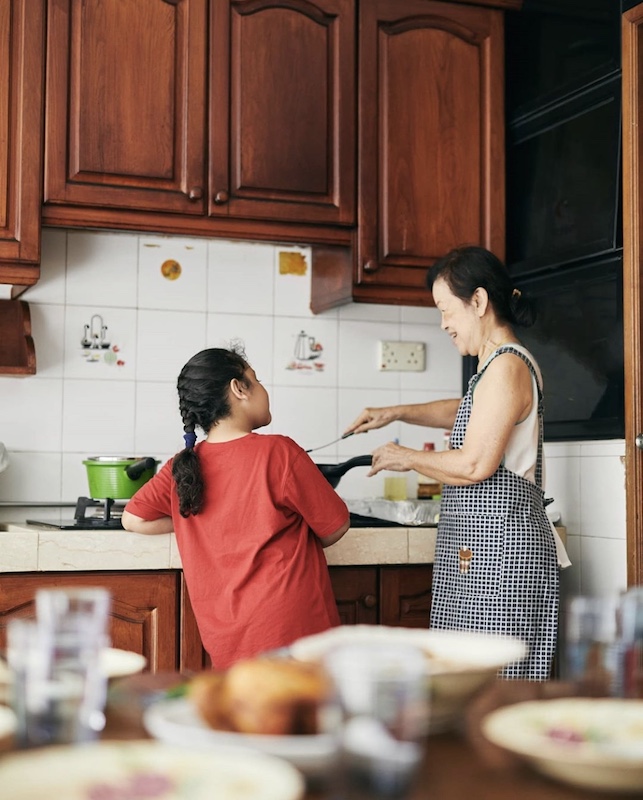 Food has a way of bonding people together whether you are younger or older, from a different race or even culture. That was what Eurasian artist Jamie Lewis wanted to do with her community dining experience called “The Little Old Cooking Club That Could” with Singapore’s theatre company, Drama Box.

Through August 24 all the way to September 13, four participants aged between 62 and 72, and six children aged between nine and 13, received a meal in a three-tiered tingkat/tiffin (a Chinese lunchbox that is stacked and with each tray used as a serving bowl when it is time to eat). While eating their meal, they would listen to an audio piece composed of interviews with children and seniors across Australia and Singapore and how food has woven into their lives. Jamie, 35, explained that this “podcast of sorts” with a storytelling element allows both the seniors and children, even though they are sitting alone with headphones, to “get a sense of being around a table with the people behind these voices”.

They then prepare a meal for the next participant and so on to the end. For the last two participants, it was a child cooking for a senior, and a senior cooking for a child. The project culminates in a sharing from the participants livestreamed on Drama Box’s YouTube channel and where everyone finally gets to see each of the cooks’ faces.

Jamie, who is born in Singapore but is based in Melbourne, added: “I have always loved listening to the stories of older people and spending time with them – whether they are family or unrelated to me. But society sometimes behaves as if the elderly are no longer relevant. As my peers are having children and I am spending time with them, I am noticing the parallels to when I was growing up – of having to negotiate our agency and autonomy as children, whilst being under the care of our elders, and within a society that still often thinks ‘children should be seen and not heard’. Both of these perceptions I genuinely challenge!”

She hopes her project “inspires us to celebrate intergenerational friendships, wisdom and community; challenge age-segregation in society and our perceptions of children and seniors’ roles in public/social spaces; acknowledge the agency of children and seniors in their everyday lives; and through food and storytelling, consider our relationships with our food rituals and broader issues such a food security, climate change etc.”

When Anne Lee, 72, found out about the project and the call for seniors to participate, she was curious as this was something she had never done before, but was immediately sold by the idea as it involved food and cooking. The grandmother of four added: “I am very interested in doing this as I like feeding people.”

So, when she received her tingkat and heard that a 12-year-old boy would be cooking for her, she thought it would a simple dish such as macaroni soup, one which would be easy for a child to cook. However, she was so wrong as when she opened the tingkat, she was pleasantly surprised to find grilled salmon with broccoli and tomatoes, rice and clear chicken soup. She shared, “I now have different view of younger people cooking as they really put their all into it. The salmon dish was simple but tasty. It is not easy getting salmon cooked properly as you can overcook it but he did it perfectly!”

And, through the audio, she discovered a senior from Australia sharing a childhood experience that is similar to her own childhood, even though she hails from another country and culture. Anne explained that the senior’s father had worked in a market and often came home with produce. “My father was an auctioneer in the wholesale market at Beach Road and fishermen would come in with their catch and he would conduct an auction. As such he would come home with a lot of seafood as it was cheap and we would eat seafood every day.”

There was also another sharing from a Jewish senior from Australia who made chicken soup for family members who got sick. This brought back memories for Anne as when she visited her daughter in the US and got sick, her daughter made her chicken soup. She also heard of a senior in Australia who has a daughter-in-law from Malaysia and another Indian senior from Singapore who has a Chinese daughter-in-law. When she heard that, she could relate as she has a Peruvian son-in-law, who would cook her Peruvian food when she visited him and her daughter in Peru.

“To me, all these sharings make the world very small. Even though we live in different countries and we are of different races, we have a common thread of food.”

When it came to Anne’s turn, cooking for nine-year-old Eli Sim, she decided to seek advice from her 11-year-old grandson, who suggested pasta. She cooked a penne pasta with minced pork and sausages in a tomato-based sauce. In the other tiers of the tingkat, she put a salad as her grandson likes a salad with his pasta, and a mixture of fruits. She also added a little special treat – “a Kinder egg, which my grandchildren love. I hope Eli enjoyed that”. 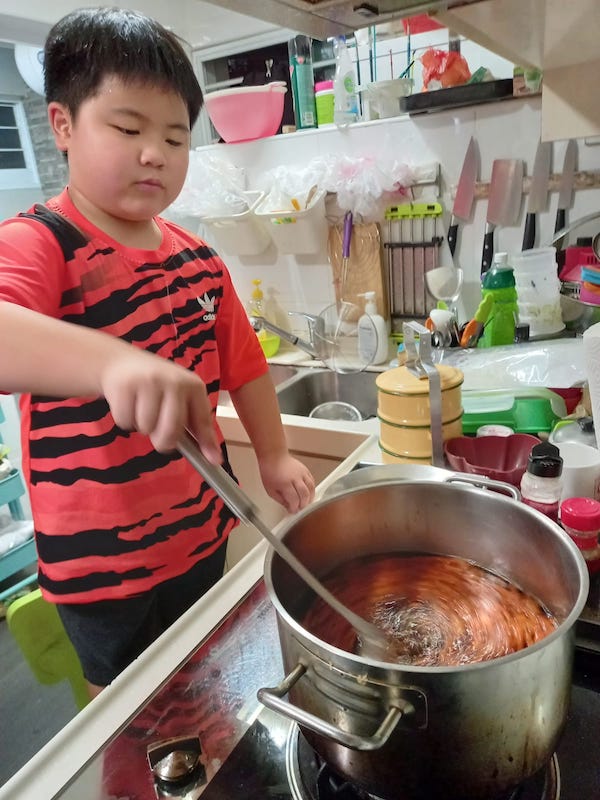 For Eli, he was more than happy to receive pasta for lunch – “I felt I was eating in some high-class restaurant.” As he enjoys cooking, this whole experience was up his wheelhouse and was more than happy to cook for a senior. He whipped up a Korean army stew for the senior, a dish he had eaten at his school canteen.

According to Jamie, she had individual conversations with each of the participants to get to know them and picked up on their various preferences. “I was also getting them to consider some of their own personal stories and relationships with cooking and sharing food, as well as being cooked for. When we worked out who was cooking for who, I then ‘translated’ these stories in a way that provided the participants with some insights and context to the person they were cooking for – the provocation being that the meal was a gift and to consider what it is they want to most share with them.”

Originally, Eli wanted to cook egg fried rice but he decided to change it to Korean food. From the information he received, Korean food would remind the senior of her daughter who went to study in South Korea and is currently working there. The senior would often travel there to visit her daughter but, with the advent of COVID-19, her travel plans have been shelved. Eli also learned she does not like to eat pork and mutton, but likes spicy food.

With all this in mind, Eli put together his stew with kimchi adding in crab meat, tofu, different types of mushrooms, beef, fishcake and chicken. As he made a lot, his family got to try it for the first time and he could continue eating it for two meals! In the other tiers in his tingkat, he filled them with calrose rice (medium-grain rice variety) with seaweed furikake, and hojicha jelly with wolfberries with a side of longans.

Asked if any stories in the recordings caught his attention, Eli mentioned about a senior in Singapore who shared that she fainted in a stall in a wet market. It was not so much that she fainted that shocked him but the water that was splashed onto her face to waken her. The water used, he shared, was from the same pail of water that fish was washed in as well as hands. He said, “This is the first time I have heard of dirty water being splashed on a face!”

For another participant, 10-year-old Juliette Buwalda, getting chicken rice for dinner in her tingkat was a big highlight for her as it is one of her favourite meals. As her family comes from Holland and she grew up in Australia, she has never seen a tingkat before. For the other tiers in her tingkat, she received braised vegetables, and jelly, which she shared with her two brothers.

Juliette also received a card with her meal. Besides a little message and the senior’s phone number, the senior drew a Vanda Miss Joaquim, Singapore’s national flower, and provided and explanation of the flower behind the card. As Juliette was touched by this gesture, she too sent a card to the senior she cooked for where she drew the Dutch national flower, the tulip, included her phone number, and wrote “enjoy your meal” in Dutch.

The meal she cooked was minestrone soup as she learned the senior was missing her son and she was working. “I wanted something warm and comforting,” said Juliette. In addition, she included sourdough bread and brownies. The senior called upon receiving the food, saying it was exactly what she needed as she was sick.

Of the audio recording, Juliette remembered mostly the stories coming from Singapore. One was of a senior who recalled the last meal she had with a loved one, which Juliette found was sad. Another was of a senior who went to a wet market to buy fish head to make soup, an experience she could not understand as she has not seen similar wet markets in Australia. She was also amazed by the story of a senior who made 100 dumplings in a day during her childhood, something Juliette’s mother, Kirsten Buwalda, shared that they would like to make someday. She added that when her daughter heard something new on the audio, she could see “the wonder and curiosity” in Juliette. 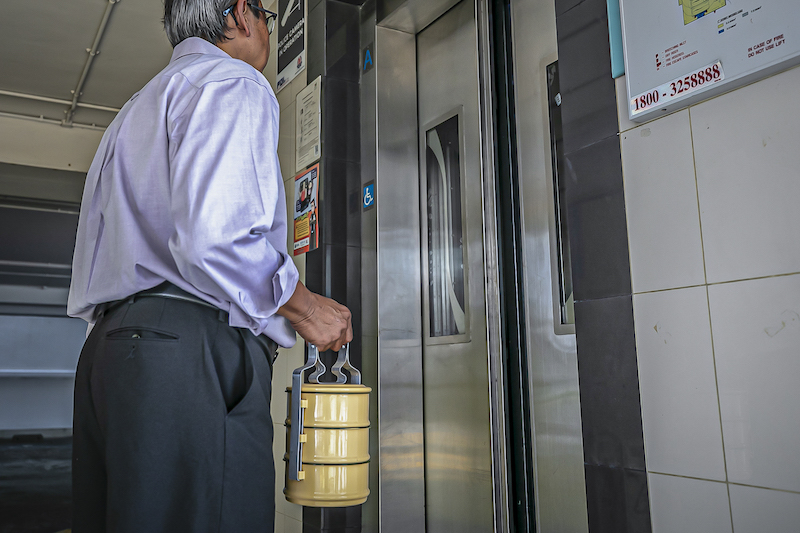 Keeping it in the family, Jamie roped her mother in, giving her the honour to kick off her project in August by preparing the first tingkat, while her father, Michael Lewis (aka Papa Lewis as known in the project), was tasked with delivering the all-important tingkats islandwide. He shared that after delivering the tingkat, two days later, he would be back at the same place, picking the tingkat for yet another delivery.

Being a part of this project brought back memories. “When I carry the tingkat over to the individuals whom I have never met before, it reminded me of the days when I was young when our family used to bring this tingkat to the elderly or poor family, or a relative who cooked for us and we had to collect it.”

The 64-year-old also shared the good memories of his deliveries of the tingkat to the seniors and children as they were often excitedly waiting for the tingkat and calling him Papa Lewis. He was also happy with the connections he made with the participants. “Anne [Lee] and I hit it off even though she is older than me. Even with that little connection, we still could hit it off. Also, when I met Timothy (one of the children who participated), he was a bit shy and I started talking to him about school and football, and he got excited as he likes football. We too hit it off. Maybe it is my nature that I can relate or it could be the food and the tingkat.”

It was also more than just the connections he made. He was a recipient of food too – Eli gave him muah chee (a snack made of glutinous rice, usually mixed with crushed peanuts and sugar) and some of the hojicha jelly with wolfberries with a side of longans which he made for the senior, while Anne gave him crab meatball soup. He never expected to receive anything and said: “I get to help out, eat all the best food and meet nice people. People are generous in nature and it is quite beautiful. What a good opportunity.”

Food is the glue that ties us all together. As Michael shared, “Love of cooking and eating makes us one.”