Needing an important lesson on the birds and the bees.

Maureen kept vigil and on her toes at every move made by the evil rooster.

I was born in an era of strict conservative upbringing by my spinster aunt in Singapore. Hence to say, the topic on the sexes was taboo in words and deeds. I wonder if ignorance is blithe or otherwise. By today’s standards, I would be called dumb and blur beyond my years. I was eight of age then and pathetically no inkling on matters of the birds and the bees.

In those kampung days in the 1950s, the poultry rearing was left to run freely around the compound premises. My aunt kept the healthiest and best mother hen for breeding new brood of chicks, whilst the rest ended up on the dining table. One day she decided to add new chicks to her collection. My aunt went over to the neighbour down the road with intent to borrow her fierce-looking and fat rooster for mating purposes with her mother hen.

As was typical of her times, she woke up early and busied herself making a big tray of steamed carrot cake. She cut a huge portion and wrapped it in banana leaves to bring as a gift on this particular visit to this neighbour. All too soon, my aunt pranced home with a gleeful smile on her face and the ugly rooster under her right arm.

Wow, showtime began and I was the heroine out to save our damsel hen in distress from cruel injuries inflicted by the tyrannical rooster. I kept vigil and on my toes at every move made by the evil rooster. Whilst at school, my heart was pounding fearfully as I visualised the fat and ugly rooster atop my poor hen.

Upon reaching home after school, I armed myself with the thickest broomstick to wallop the daylights out of the rooster should I catch him in mischief. I stayed close to my hen and tried my utmost best to keep her safe and far away from the rooster.

I lamented furiously to my aunt that she had better return the disgusting rooster to the neighbour, however, she noted my ignorance to the case and left the subject undisclosed to me.

I didn’t lose any weight from running and catching the rooster. However, I did have many chances to grab the rooster and flung him off his target. I was jubilant each time I tore the rooster away from my hen and swung him around with all my might! He landed dazed but not out on the ground. Gosh, I was delighted to exercise my revenge on the mean rooster. How dare he did what he did in my territory to my poor henny.

No sight of the rooster

I returned home from school one day and discovered the devil of the rooster no longer with us. I looked at the hen dozing warmly on a bush of hay at the corner of the backyard. She seemed to need a long relaxing overhaul which I did not understand. Must be that idiotic rooster at fault! If I ever caught sight of him again, I promised I would put him to eternal sleep and have a good dinner out of him. 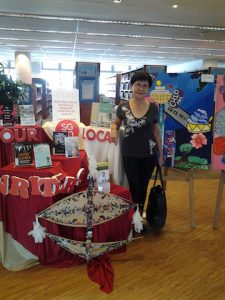 After some time, I saw the cutest and prettiest brood of chicks following closely at the heels of the mother hen. I was too excited and happy to care where and how the chicks came from.

Now I am a pioneer in my years. Looking back with chuckles at my naivety and scoffed that all this would not have happened to me if I were only taught the business of the birds and the bees.

Maureen Tay (left) is a 72-year-old retiree who enjoys writing and sharing her life stories. She stays active and volunteers in community clubs, the Silver Arts programme, CDC as well as in church.