Seniors embracing ageing through social media are capturing the hearts of fans of all ages globally. 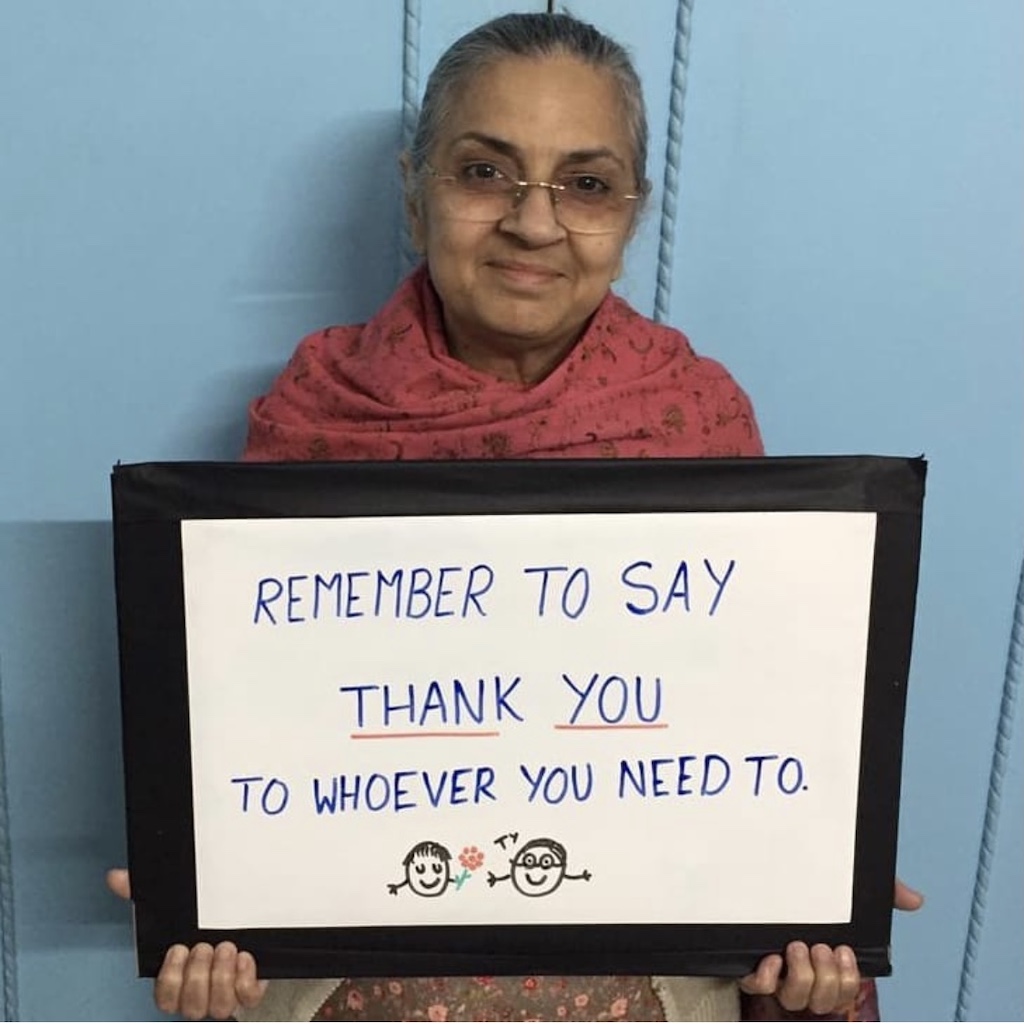 Poonam Sapra in India holding signs with advice on living a healthy, good and happy life.

‘Granfluencers’ are social media influencers who are seniors. You can recognise them by their innovative, energetic and positive approach towards embracing life no matter what age they are in. They do not let ageing define who they are. Instead, they are showing the world that age is just a number, and they are creating waves that define the future of ageing.

Asia’s granfluencers are role models for all generations and have reached celebrity status with one senior who has followers reaching over 13 million. The social media world has created a platform for these granfluencers to challenge conventional norms of what being a senior is all about and break stereotypes. They take to their mobile phones to sing, dance and model, and are proud to share their daily lives for millions of fans of all ages to see.

A granfluencer represents the ageing icon of the future. The younger generations ‘follow’ these granfluencers because they find them trendy, fun, confident and different. The best asset of the granfluencers is their wealth of experience and determination to live life to the fullest. They appreciate life and the people around them. They embrace positivity, approach new ideas and are happy to try new experiences, especially those introduced to them by their younger friends, children, or even their grandchildren.

Helping grandma, grandpa, mum and dad to be profiled on social media with their own handles and pages has been one of the most popular and successful intergenerational bonding experiences, as seen from Ageing Asia’s top 10 trending list. Popular apps used include, TikTok, Douyin, Kuaishou, Instagram as well as Facebook.

Granfluencers mark a sign of changing times indeed; everyone can be an Internet sensation or celebrity. Social media has reduced barriers to entry, with granfluencers leading the way to show us that ageing can be trendy and fashionable, too. The young are now excited to take selfies and videos with their cool “glam-ma’s” and “glam-pa’s”!

The top 10 trending granfluencers in Asia: 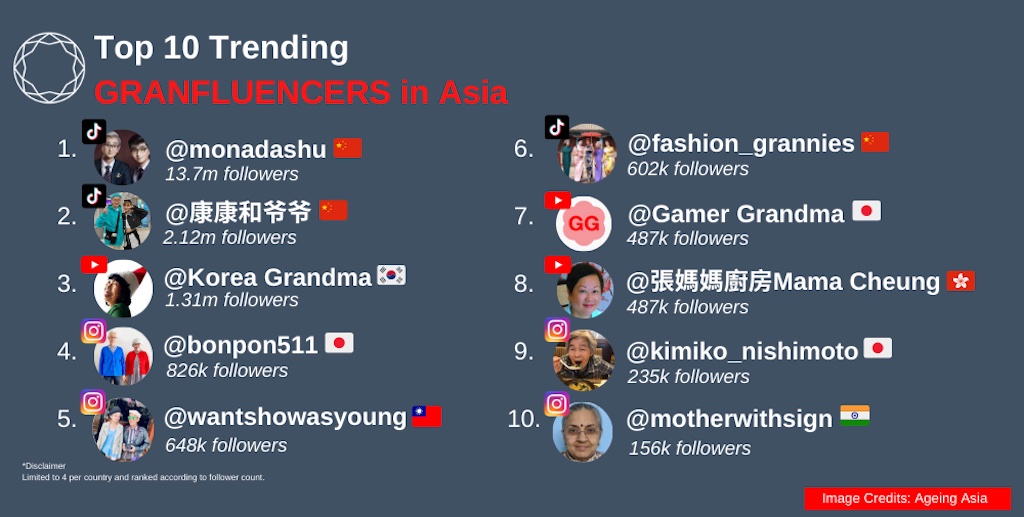 1. @Monadashu, China – Under the handle of his son, @monadashu in Douyin, is 74-year-old Grandpa Beihai, who is fondly known as Beihaiyeye. He has 13.7 million followers, and is best known as China’s most handsome senior with a debonair style.

2. @康康和爷爷, China – Eighty-three-year-old Grandpa Kang has 2.12 million followers in Douyin and is filmed by his grandson, Kang Kang. This intergenerational partnership showcases grandpa as a fashion icon with his grandson creating different looks for him from fun outfits to trendy and humorous ones.

3. @korea_grandma, South Korea – Grandma Park Makrae is a YouTube session and known as “Korea Grandma”. She has 1.31 million subscribers on YouTube. Her granddaughter started documenting her grandma because she saw it as a possible way to combat dementia in future. Their viral video exploits include beauty regimes, travel and cooking. 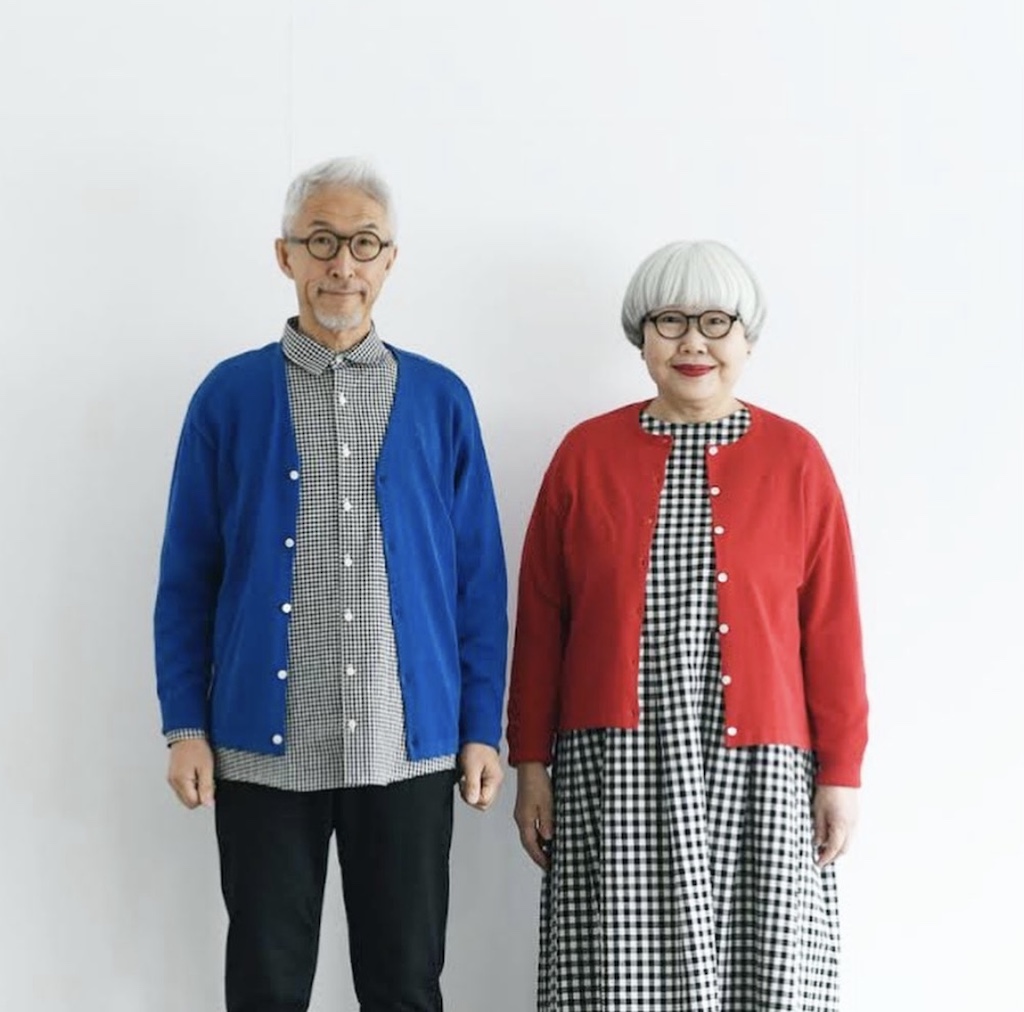 4. @bonpon511, Japan – This trendy fashion icon and super loving couple with 826K followers on Instagram have been married for 40 years, and have been dressing in matching outfits everyday of their marriage. In their 60s, this couple’s Instagram handle is a combination of both their names, Bon and Pon. The choice of 511 is the date of their wedding anniversary.

5. @wantshowasyoung, Taiwan – This octogenerian couple, Chang Wan-Ji, 83 years old and his wife, Hsu Sho-er, 84 years old, operate a laundry shop, and have gained Internet fame by modelling discarded clothes that have been left behind in their shop. Their grandson Reef Chang set up the account for them. They have 648K followers on Instagram and hope to raise awareness for environmental fashion.

6. @fashion_grannies, China – Part of the group, Glamma Beijing, they are four amateur grandma models, aged over 60 who became Internet sensations after sashaying down the streets of Beijing in figure-hugging qipaos in China last year. They have over 600K followers on TikTok.

7. @gamergrandma, China – Grandma Hamako Mori from Japan has been playing video and e-sports for four decades and in May 2020 was declared as the oldest ever gaming YouTuber in the world at the age of 90 years old. She has 487K followers on YouTube.

8. @張媽媽廚房, Mama Cheung, Hong Kong SAR – Hong Kong home cooking sensation Mama Cheung has 488K followers on YouTube. She creates a whole universe of Cantonese food and is a typical aunty that will cook up a storm for one to see. 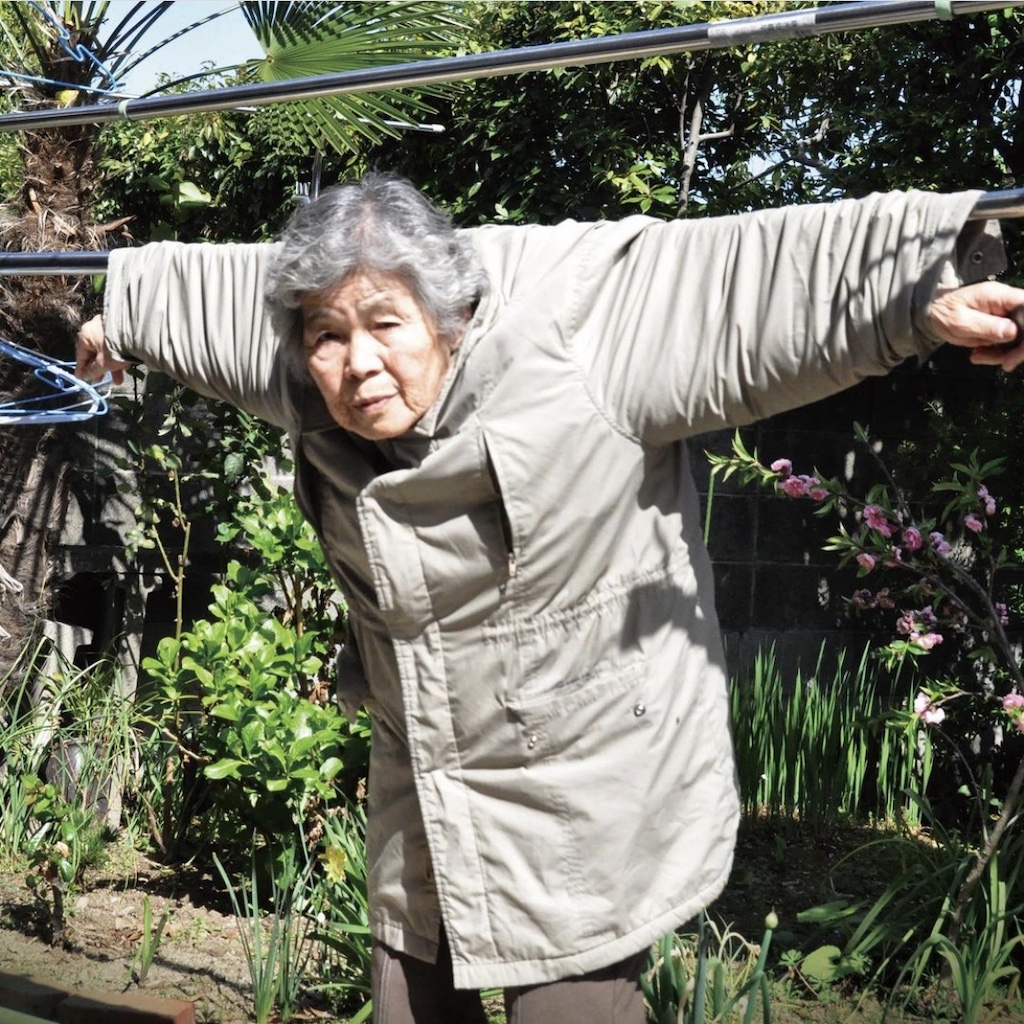 Kimiko Nishimoto from Japan shows off her self-portraits.

9. @kimiko_nishimoto, Japan – Ninety-three-year-old photographer Kimiko Nishimoto from Japan has 235K followers on Instagram, and is best known for her experimental wacky self-portraits. She discovered her love for photography at the age of 72 years old and edits her own images. Her self-portraits present everyday life in an ironic way.

10. @motherwithsign, India – Yet another mother-and-son collaboration, Poonam Sapra and her son Pranav created the Instagram page together with his mother holding up signs with wholesome, easy to relate, humorous and motherly advice on living a healthy, good and happy life. They have 156K followers on Instagram.

Here’s a look at some of the granfluencers globally: 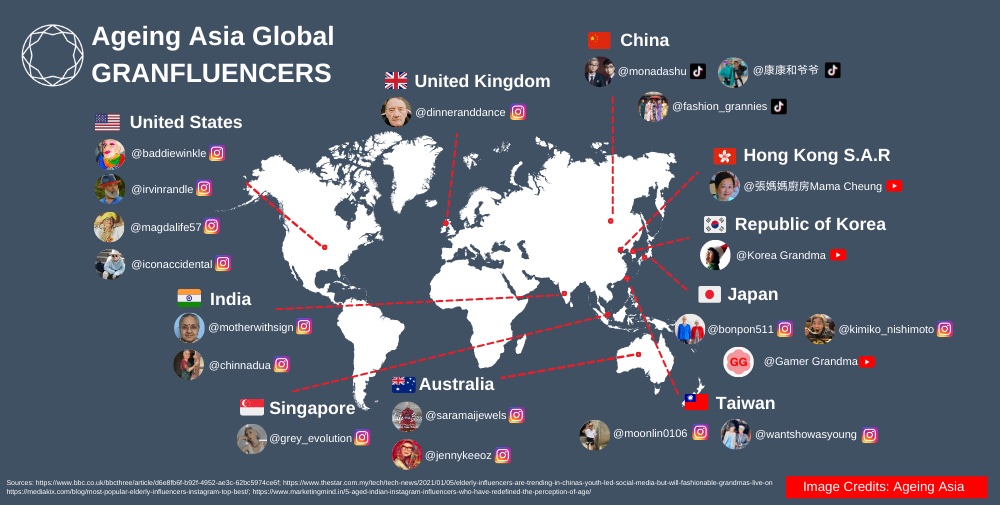 ** This article has been reprinted and edited with permission from Ageing Asia.