Living in my kampong

A 76-year-old shares how it was like living 43 years in a kampong, and the simple and tranquil life. 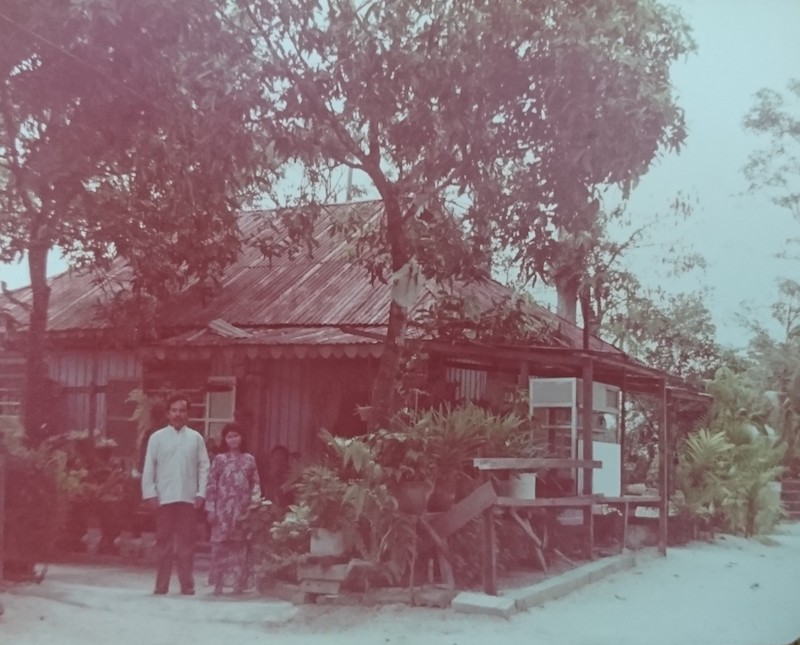 I am a fourth-generation member of a family of fishermen. My family lived in the old Kampong Tampines that was once part of Pasir Ris. I have nine brothers and sisters.

At the age of 17, I took an interest in photography and started taking photos of my surroundings with an old AGFA camera (an analogue camera). During my kampong (“village” in Malay) days, having a camera was a luxury. This camera was a gift from my brother-in-law for passing my motorcycle licence test. He knew that I had a special interest in photography since I was young. It soon became a priceless possession that I took around with me everywhere.

With my camera, I captured many cherished moments and memories of my second, third and fourth generations’ family members, and of the simple life in our kampong, Kampong Tampines. I even had the camera when I was in the army for four years, during the confrontation with Malaysia and Indonesia. However, as the winder was damaged and there were no spare parts, I had to later upgrade to a Nikon with a zoom camera. 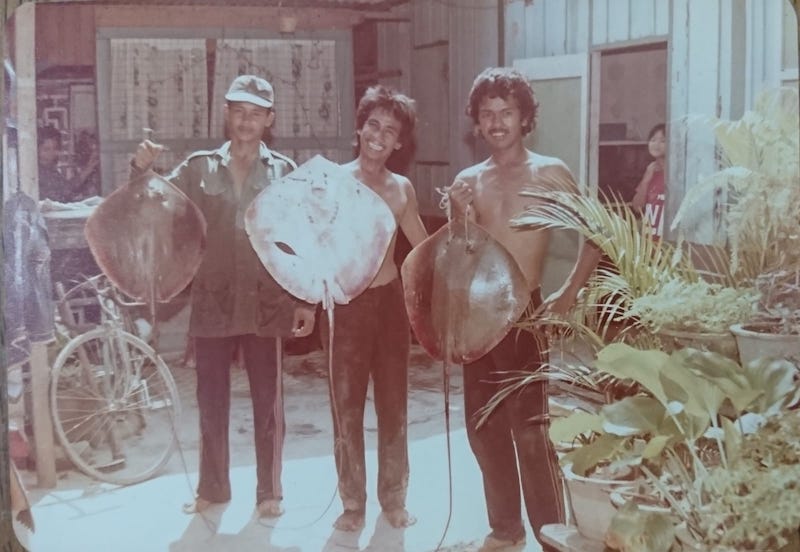 A photo of Samat’s fifth generation family members in early 1980s in front of his house at Kampong Tampines.

All five generations of my family lived in Kampong Tampines. Back then, we did not have proper road signs like today and the villagers used numbered markers known as ‘mile markers’ which were placed along road sides to find our way around.

Following the 10 milestone of Tampines Road into the kampong, you will find yourself in Kampong Luar (“outside” in Malay) currently along Elias Road. Ten-and-a -half milestone from Kampong Luar, you will reach Kampong Dalam (“inside” in Malay) where I used to live along Pasir Ris Dr 3 and Pasir Ris Dr 8 today. During the kampong days, both Kampong Luar and Kampong Dalam also did not have proper roads like today. We had to walk through bushy sandy track, lalang (“weeds” in Malay), Tempinis Trees (“ironwood trees” in Malay), and cashew nut trees before finally reaching the main road. Sometimes we got hungry and stopped to pick the wild fruits of Pokok Kemunting (“Ceylon hill gooseberry” in Malay) to munch on our way.

My house was located at Kampong Dalam within Kampong Tampines. As there was no electricity in our kampong, we used firewood to cook our meals. This was eventually replaced with portable kerosene stoves. Charcoal iron, which was commonly used in most homes in the kampong was used to iron clothes. Pieces of smouldering charcoals were then added into the iron. Water for drinking and other daily necessities had to be drawn from a common well using a rope and bucket, which I had to get before I could go out to play. It was only in the early 1960s that the Government supplied villages with electricity and standpipes. 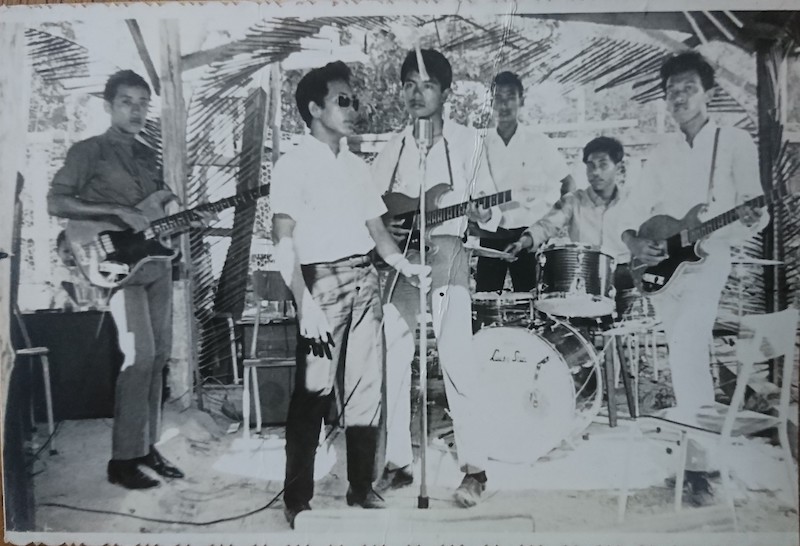 Living in the kampong, my family of fishermen made a living from our catches. I learned to fish from my father and my uncles when I was a young boy. We often rowed out to Pasir Ris Beach in our sampan (“small boat” in Malay) to catch fishes, shrimps, mussels and clams along the riverbank of Sungei Api-Api, which was close to my house. The fishes we caught for the day were for our daily consumption, while the rest were sold at the market. My mum also made homemade belacan, a type of fermented shrimp paste, from the freshly caught shrimps. I remembered once when I went out on the sampan alone, I saw some dugong. They would come close but never to the point of capsizing the boat.

After my father got his driving licence, he worked as a supervisor at a pineapple factory (near Changi Prison) and drove the boss around, while my mother remained a full-time housewife (most of the women at that time did not go to school).

Times were hard and resources were limited during the kampong days. The villagers depended on one another for neighbourly help – we called it the communal, kampong spirit – also known as gotong royong. Most villagers from the same kampong were related to one another and knew each other well. When it was Hari Raya Puasa, the whole village would celebrate by lighting up lampu pelita buluh (“Raya oil lamp” in Malay) in our homes and visit each other’s house with kuehs (“bite-sized cake” in Malay), ketupat (“diamond-shaped rice cake” in Malay), rendang (“meat stew” in Malay), and other delicious food!

One of the things I enjoyed was singing and music so I started a band where we played at weddings and birthday parties, and would earn up to S$500 each time. I learned how to sing so I was the singer and we got a teacher to teach us and paid him a small fee. I also started a football club, and one of the players even went on later to represent Singapore in major football events.

In 1961, at the age of 16, I started working at Telecom, which is now The Fullerton Hotel. I had never gone to town before and had to ask my father how to go on the first day of work. He said to me that while I cycle, to look out for the clock tower. He said from far, one would see it as during those days there were no tall buildings. I worked for 29 years and got the “golden handshake” as the processes got computerised and I couldn’t keep up.

As the years went by, Pasir Ris evolved over time. In 1987, Kampong Tampines moved out to make way for Pasir Ris New Town. My family was the last family to move out of the kampong that we shared many memories in. Living in a kampong for 43 years of my life was the most memorable life experience that I have encountered. The feeling of serenity and tranquillity will never die as long as I live. 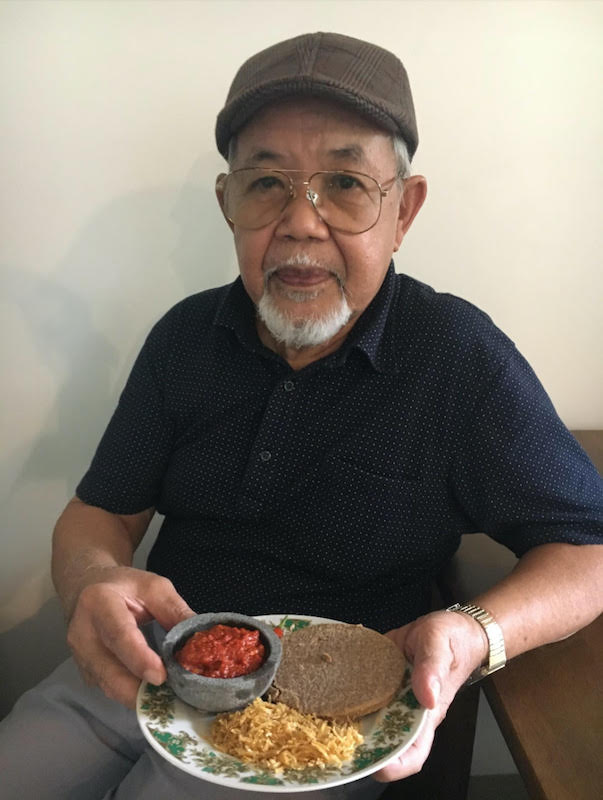 Till today, whenever I remember and look back at my old photos of my kampong, it always brings me tears and euphoria. I have over a dozen albums (30 photos in each) of my younger days living in the kampong, which I have passed to my children. I have been telling my children and grandchildren about my stories. I hope the younger generation would learn more about Singapore’s history. Even now that I have lived 33 years in a HDB, I still miss the kampong life. When I leave my house, I see bricks to the right and left, but when I was living in the kampong, I could see the sea and the valley.

For me, looking at the photos I have taken, I can say that I left my heart at Kampong Dalam, my dear kampong in Kampong Tampines.

Samat Sulaiman, 76, grew up in Kampong Tampines in the 1940s. He is an avid photographer who loves to capture photographs and share his memories of the past and present times. He recently shared his story during the virtual Singapore Heritage Festival.